A video doing rounds on Instagram shows as many as four 2022 Toyota Land Cruisers in a mangled state.The incident took place in Salalah, Oman and the reason behind the accident is still unknown.Toyota recently launched the 2022 Land Cruiser SUV.
By : HT Auto Desk
| Updated on: 03 Jul 2021, 03:49 PM 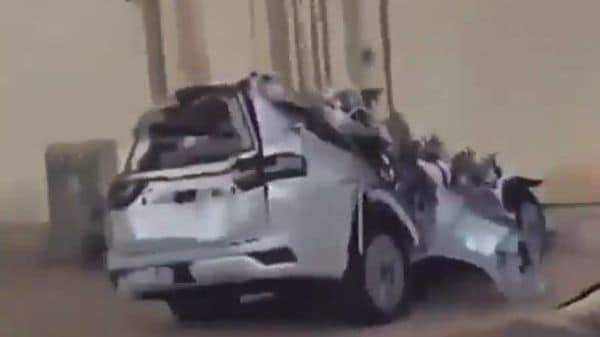 Screenshot from the video posted by kurdistan_automotive_blog_ on Instagram.

A video of a car carrier packed with new 2022 Toyota Land Cruiser SUVs involved in an accident is being widely shared on social media. The incident took place in Salalah, the third-largest city in Oman, where Toyota is trying to prioritise the Land Cruiser's rollout as the car has created quite a following of its own.

In the video posted by an Instagram page, many new Land Cruisers appear to be totalled due to the impact of the accident. However, the reason behind the accident is still unclear. Reports say that the car carrier was on its way to the dealership. The video has been posted in three parts. The first one shows as many as four damaged Land Cruisers, some of which were mangled.

The second video was taken shortly after the accident where one can see the car trailer and the SUVs on their sides and an LC300 that must have fallen off the platform. And the third video shows a damaged vehicle on the side of the road. The post attracted some mixed reactions from netizens. It has not been ascertained if the carrier's driver was injured during the accident and the exact number of the Land Cruisers that have been damaged.

Toyota recently unveiled the 2022 Land Cruiser. The Japanese automaker completely revised the exterior and the car also got a new engine and transmission, as well as a new cabin that retains the iconic styling characteristics of the premium SUV. It has a twin-turbo V6 3.5-litre petrol unit that can create a power of 409 horsepower and a peak torque of 650 Nm. It also has a diesel option which has a 3.3-litre twin-turbo unit. This engine can generate power of 305 horsepower and a torque of 700 Nm.