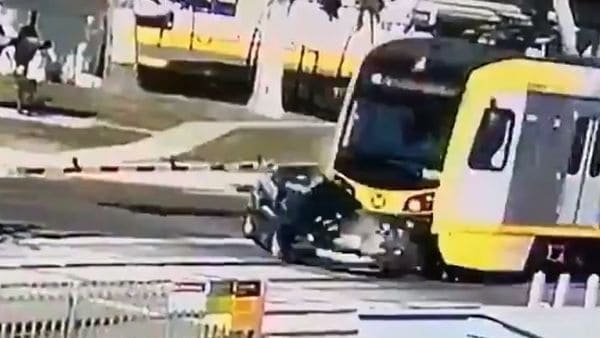 Photo grab from a video posted on Twitter by @LAPDHQ

In yet another example of why it is absolutely imperative to be extremely attentive near rail tracks, a shocking footage of a BMW car getting hit by a speeding train has emerged from Los Angeles. The footage, released on Twitter by Los Angeles Police Department, has gone viral online with many urging for both drivers as well pedestrians to be alert near rail tracks.

The footage shows a black BMW car stopping at what appears to be a traffic signal near an open rail track. The driver then turns to the left and moves to cross the rail tracks. It is then that a hurtling passenger train smashes against the bonnet of the car at break-neck speed.

This could’ve had a tragic outcome. Fortunately the driver survived with minor injuries, but this should serve as a good reminder to all of us — pay attention near train tracks, and always obey all traffic signals and devices. pic.twitter.com/udDSkeDTPn

While the details of the accident are not yet known, it appears that there were red warning lights to alert road traffic about the incoming train. As for the driver in this accident case, he/she managed to stage a dramatic escape and suffered only minor injuries.

Reactions on Twitter range from comments which highlight how there were no double arms blocking the entire road next to the tracks to people wondering why the driver did not do the basic head-turn check. Others, while relieved that the driver survived, wondered how.

While such accidents are unfortunately common in many parts of the world, the developed countries are not immune to it either. Los Angeles Police Department asked people at large to always be alert while behind the wheels and it is generally agreed that spreading awareness is the best possible way to ensure that loss of life and damage to property in such unfortunate ways are kept at an absolute minimum.