With electric vehicles fast-moving beyond just early adopters to the mass market buyers, carmakers are trying their best to market their battery-powered machines.
By : HT Auto Desk
| Updated on: 10 Feb 2022, 10:50 AM 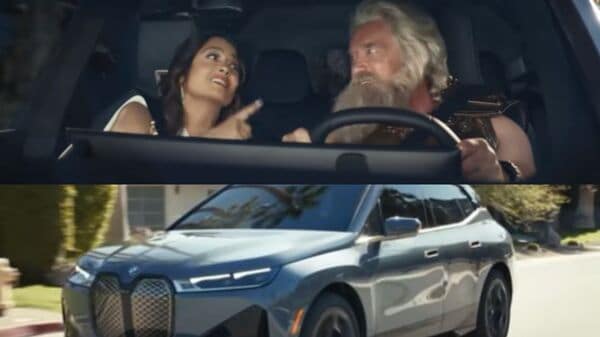 BMW has picked Arnold Schwarzenegger for its latest Super Bowl commercial for electric iX, where the former governor/terminator plays the role of Zeus - the Greek god of lightning. He is accompanied by Salma Hayek, who plays the role of his wife Hera and surprises him with the BMW iX to uplift his mood.

In the 60-second ad film, Schwarzenegger plays a grumpy Zeus who goes away Palm Springs for retirement, where he occasionally charges his neighbors’ golf carts and hedge trimmers. But he doesn't seem happy and that's when Hera gets him an iX, to which Zeus exclaims with a surprise, “All-electric?" The couple then takes a ride in the all-electric BMW iX while singing a song.

With electric vehicles fast-moving beyond just early adopters to the mass market buyers, carmakers are trying their best to market their battery-powered machines, trying to shake the stigma of electric vehicles being earnest. "I always said ‘We have to create a movement,’" Schwarzenegger told Bloomberg Green. “So I would push alternative fuel vehicles from here to eternity."

While Schwarzenegger is all in for electric vehicles, he hasn't been very impressed with the latest offerings from carmakers, and has rather got his brawnier vehicles converted. He converted one of his Hummers into hydrogen-run and his Mercedes G-Class SUV was converted to battery power. “In the last 20 years … an electric car (from) any car company, those cars always looked somewhat stupid," he explained.

However, he is in for the BMW iX and other similarly swollen electric SUVs and trucks that will hit the market this year. “Now, my friends in the gym … these hardcore bodybuilders, they’re finally getting it," Schwarzenegger explained. “No one can say anymore, ‘This electric stuff, I’m not into that.’"

The BMW iX is set to get plenty of competition as the number of electric vehicles in the US are expected to double to about 60 this year including debut of GMC Hummer. Kia too will be touting for its EV6 sedan in the Super Bowl this year.