The tie-up between Volkswagen's Traton and Toyota's Hino echoes an agreement between global truck leaders Daimler and Volvo earlier this year to work together on fuel-cell technology.
By : Bloomberg
| Updated on: 29 Oct 2020, 08:41 AM 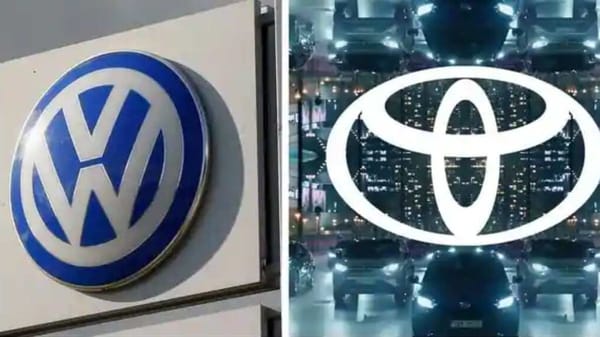 Volkswagen and Toyota's truck subsidiaries are joining forces on battery-electric and fuel-cell vehicles.

Volkswagen AG and Toyota Motor Corp’s truck subsidiaries are joining forces on battery-electric and fuel-cell vehicles, enabling the companies to split the costs of developing technology needed to comply with stricter emission rules.

The new initiative between VW’s Traton and Toyota’s Hino expands a purchasing collaboration forged two years ago and will include components, electric-vehicle underpinnings and software, the companies said Wednesday in a joint statement.

Engineers will work together at Traton’s Scania unit in Sweden and at a later stage in Tokyo to speed up development for battery-electric and fuel cell systems as the two manufacturers are “convinced that both technologies will be needed in the future," according to the statement.

The deeper tie-up between Traton and Hino echoes an agreement between global truck leaders Daimler AG and Volvo AB earlier this year to work together on fuel-cell technology. The trend toward closer cooperation between industrial giants raises the stakes for newcomers such as Nikola Corp., which is in talks to partner with General Motors Co and plans to build a truck with CNH Industrial NV in Germany.

Establishing more of a foothold in Asia marks a step forward in Traton’s global expansion plans to reduce its heavy dependence on sales in Europe. The VW division, which comprises the Scania and MAN brands as well as a smaller operation in Brazil that makes trucks for emerging markets, earlier this month reached a deal to buy the remainder of US manufacturer Navistar International Corp. for about $3.7 billion.