Home Auto News Volkswagen Has A Colossal Budget For Cutting Edge Cars. And Won't Budge From It

Volkswagen has a colossal budget for cutting-edge cars. And won't budge from it 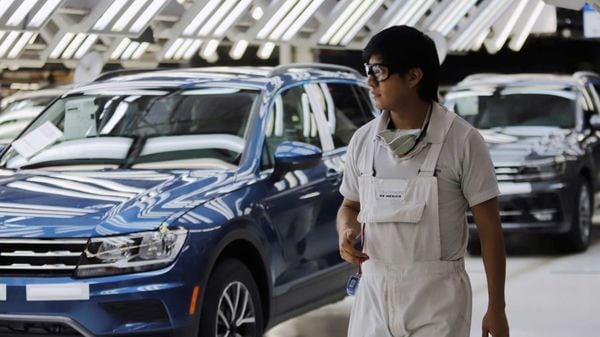 So much has changed in the year since Volkswagen AG’s directors emerged from the board room with a spending plan to turn its cars into battery-powered software devices.

But don’t expect that budget to do too much budging.

When VW’s board convenes Friday for its annual financial-planning meeting, directors will have to take into account the millions of vehicle sales lost to the pandemic. But they won’t take aim at the 60 billion euros ($71 billion) earmarked a year ago to challenge Tesla Inc.’s electric dominance and keep incumbent rivals including Toyota Motor Corp. at bay.

“We are adapting, we are putting more pressure, but we don’t compromise on our technology road map," Chief Executive Officer Herbert Diess said in a Nov. 5 interview. “Software is becoming an important part of our business, it will be decisive, and electrification was accelerated by Covid and not slowed down. So there’s no reason why we should question the big lanes and the big directions of our planning."

The world’s best-selling automaker allocated 33 billion euros to electric mobility alone through 2024 to develop the industry’s broadest lineup of battery-powered vehicles. The coming year will be pivotal to VW getting those plans off the ground even as Covid-19’s resurgence threatens major car markets.

Here’s what to expect from this year’s budget planning:

After overcoming software problems that delayed the ID.3 electric hatchback’s rollout in Europe this year, VW will go global in 2021 with its crossover sibling, the ID.4. It will be manufactured in Germany and China next year and sold in the US, where production will start in 2022.

The breadth of next year’s electric launches gives a sense of the payoff from the amount of spending VW already has done, with no signs of slowing.

The premium Audi brand will flank its e-Tron SUV with sportback and higher-performance GT versions. Porsche will launch a more spacious iteration of the Taycan. And Czech brand Skoda will roll out the Enyaq, a sister model to ID.4.

Audi has overtaken operation of a new car-software unit that’s developing a standardized architecture and operating system for the entire group. It has more than 7 billion euros in investments slated by 2025.

“These are competencies which we didn’t own before, which we have started building up over the past couple of years but there’s still a long way to go," Diess said last week. “We see that probably as the most important race and decisive point for our industry in the next five to 10 years."

To the extent that VW delivers a message of belt-tightening, it will be with regard to reigning in the labyrinth of models across its dozen brands. There’s perhaps no better demonstration of the company’s willingness to do away with iconic nameplates than its decision to dump the Beetle last year.

“We are putting more pressure on the complexity of our product portfolio," Diess said. “We cannot work in every niche which we probably would have liked to."

Make Costs a Cause

For all of VW’s optimistic talk about investment, some would like to hear a little stronger message of restraint. While earnings are on the mend following this year’s virus disruption, they haven’t come back quite as strongly as some of its peers.

“Without a clearly committed restructuring of VW’s core business, the addition of electric vehicle plants and products will likely add substantial cost and complexity that will weigh on earnings and cash flows," Arndt Ellinghorst, a Sanford C. Bernstein analyst, wrote in a report this week.

“The key," Ellinghorst said, “will be whether VW will continue to try and grow out of its cost problems."