According to VW CEO, additional cost reductions and a speedier overhaul of the German industrial giant are vital to withstand new rivals with superior financial firepower.VW sold 8.31 million vehicles through the end of November 2020, dwarfing Tesla’s full-year deliveries of almost 500,000 cars.
By : Bloomberg
| Updated on: 06 Jan 2021, 13:24 PM

The disruptive threats Herbert Diess saw coming for big, incumbent automakers soon after he took over the top job at Volkswagen AG are playing out as predicted, only faster and in more dramatic fashion.

In an interview, the chief executive officer said additional cost reductions and a speedier overhaul of the German industrial giant are vital to withstand new rivals with superior financial firepower. He’s been reflecting not only on trying to keep pace with Tesla Inc. but on the risk that Apple Inc. adds another mighty competitor with almost unlimited resources to the automotive arena.

“Despite all efforts, we’re currently in a rather more difficult situation than in 2018, when I took office," Diess said. “What really has changed -- and what I hadn’t expected to this extent -- is the view of capital markets on our industry."

In the almost 2 1/2 years since Diess told investors VW needed to aim for valuation levels more in line with Apple, Amazon.com Inc. and Google to still be around for another two decades, the gap has only grown. Elon Musk has beaten him to the punch by fetching an almost $700 billion market capitalisation with Tesla, making the company worth more than the next six most-valuable carmakers combined.

This is more than just a matter of bragging rights. In a single week last month, Tesla and Chinese electric-vehicle makers Nio Inc. and XPeng Inc. raised $9.7 billion worth of capital by selling stock. The $5 billion that Tesla raised was equivalent to about half of VW’s annual net cash flow.

But Tesla’s ability to sustain profits for five straight quarters after years of losses ignited investor enthusiasm both about its business and those trying to replicate its success. China’s XPeng and Li Auto Inc. listed on U.S. exchanges last year along with several startups that merged with special-purpose acquisition companies, including Nikola Corp. and Fisker Inc.

Some analysts are warning the trend is overdone. The combined roughly $1 trillion market cap of traditional global auto manufacturers remained largely unchanged over the past 12 months, while the value of new rivals went through the roof.

“Valuations of and sentiment toward traditional vehicle manufacturers continue to be far too pessimistic," Sanford C. Bernstein analyst Arndt Ellinghorst said in a note last week. “We remain convinced that established companies with global reach, brand equity and strong balance sheets will play a dominant role in the future of mobility."

UBS Group AG analysts led by Patrick Hummel have made VW their top pick among European automakers, predicting that “winning EV strategies are likely to be rewarded with higher multiples." The world’s best-selling automaker has pledged to become a global EV force, with the industry’s largest investment plan of almost $90 billion over five years.

VW cautioned in November that ongoing fallout from Covid-19 will weigh on earnings this year but stuck to its mid-term financial targets, which include restoring net cash flow to more than 10 billion euros ($12.3 billion) as early as 2022. Delivering on these goals could go a long way to defy skeptical investors that remain unconvinced VW can become more nimble.

“We haven’t sufficiently proved yet that we can hold our ground in the new competitive environment -- our valuation is still located in ‘old auto,’" Diess said. “This leads to a grave disadvantage for us in terms of access to required resources." 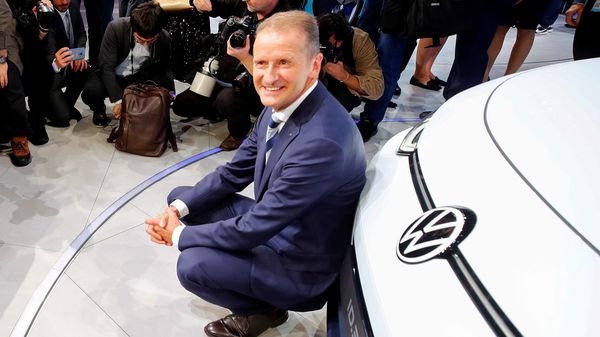 Investments VW and its peers are making in EVs, software operations, mobility platforms and self-driving technology will be enormous. Investors would face much higher dilution if the companies were to try raising funds by selling stock as Tesla has, and such a scenario is further complicated at VW by its complex shareholder structure.

While profits from Porsche, Audi and its Chinese ventures have filled VW’s coffers over the years, its high fixed costs were exposed when sales tanked during the pandemic. Earnings at several peers proved more resilient.

“We must significantly improve our costs and work on efficiency, to gear the traditional auto business significantly more toward returns," Diess said. He sought to rally the troops last month by declaring VW would pit its largest factory in Wolfsburg, Germany, against Tesla’s plant still under construction near Berlin.

VW also embarked on a plan to reduce material costs by 7% within two years and hammer out a deal with unions in the first quarter to lower fixed costs 5% by 2023. Diess, who ruffled feathers last year by trying to narrow the group’s focus on its main car operations, insists the company can ill-afford to waste time.

“The overhaul is still progressing too slowly," he said.

The former BMW AG executive received a fresh vote of confidence last month from VW’s supervisory board to pursue his overhaul and trim costs. He warns there could be dire consequences if the company that employs 670,000 people worldwide does too little, too late to change.

“Not everyone realizes the threat to our company to the same extent," Diess said.