The incentives and disincentives in the Vehicle Scrappage Policy are aimed to encourage owners to discard their old and polluting vehicles which have higher maintenance and fuel consumption costs.
By : HT Auto Desk
| Written By : Sabyasachi Dasgupta
| Updated on: 06 Oct 2021, 10:34 AM 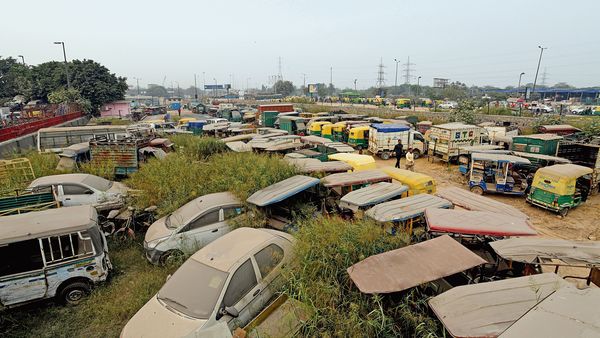 The vehicle scrappage policy will pave the way for new vehicles. (File photo)

The national vehicle scrappage policy will come into effect from April next year. Ahead of rolling out the scheme, the Ministry of Road Transport and Highways (MoRTH) has issued a notification which clearly explains the benefits and incentives of the policy. It also states the disincentives too.

The vehicle scrappage policy rules, which are likely to be called the Central Motor Vehicles (23rd Amendment) Rules, 2021, will come into effect from April 1, 2022.

"As an incentive, there will be waiver of the fee for issue of certificate of registration for a new vehicle, purchased against the authority of the Certificate of Deposit (CoD) issued by a Registered Vehicle Scrapping Facility for a vehicle being scrapped," read the press statement by the ministry.

For imported bikes and cars, the renewal of registration will be more costly. It has been pegged at ₹10,000 and ₹40,000, respectively.

The notification also states that the renewal of certificate of fitness for public and commercial vehicles, like bus or truck, older than 15 years will also cost eight times more than it is currently. The renewal fee may range between ₹10,000 and ₹12,500.

If the owner fails to renew registration of the old vehicles, he or she would need to pay a fine of ₹50 for each day for the delay. In case of delay in applying for renewal of registration certificates, an additional fee of ₹300 will be charged against private vehicle owner for delay each month. ₹500 will be charged for commercial vehicle owner every month for such delays. An additional fee of ₹200 will also be charged if the RC is a smart card-type issue.

Prime Minister Narendra Modi had launched the National Automobile Scrappage Policy in August this year. It has also made compulsory for for heavy vehicles to undergo fitness tests from April next year, and the same will be in place in a phased manner for other categories from June 1, 2024.

Finance Minister Nirmala Sitharaman had introduced the policy on February 1 during her Budget presentation. The voluntary vehicle scrapping policy aims to phase out old and unfit vehicles and make it mandatory for personal vehicles to undergo fitness test in automated centres after 20 years while the commercial vehicles will undergo the test after 15 years.

The norm for fitness tests of old vehicles may differ from state to state. InDelhi, the National Green Tribunal (NGT) has passed an order banning all diesel vehicles that are over 10 years old from plying on the roads.