The National Highway Traffic Safety Administration has said that its new fuel economy requirements are the strongest to date and the maximum the industry can achieve over the time period.
By : HT Auto Desk
| Updated on: 04 Apr 2022, 09:58 AM 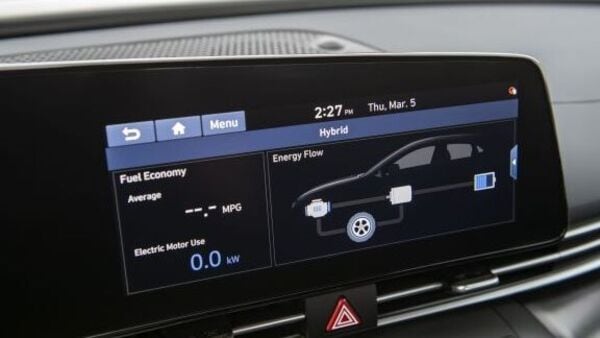 The fuel economy rating is visible on the infotainment system of a vehicle. (Representational image)

New federal rules unveiled in the US undo a rollback of fuel economy standards enacted under President Donald Trump. The new rules tighten the requirements for new vehicles sold in the the country to have to average at least 40 miles per gallon of gasoline in 2026, up from about 28 mpg.

The National Highway Traffic Safety Administration said its new fuel economy requirements are the strongest to date and the maximum the industry can achieve over the time period. By following these guidelines, gasoline consumption will be reduced by more than 220 billion gallons over the life of vehicles, when compared with the Trump standards.

For the current model year vehicles, standards that were enacted under Trump's leadership requires the fleet of new vehicles to get just under 28 miles per gallon in real-world driving. However, the new requirements increase gas mileage by 8% per year for model years 2024 and 2025 and 10% in the 2026 model year. The move is also expected to decrease carbon dioxide emissions and raise new vehicle prices in an industry that is already pressed by inflation and supply chain issues.

While petrol prices are already inflated, auto dealers say that more stringent fuel economy requirements would drive up prices and push people out of an already expensive new-car market. NHTSA projects that the new rules will raise the price of a new vehicle in the 2029 model year by $1,087.

The new standards won't immediately match those adopted through 2025 under President Barack Obama. As per NHTSA officials, they will equal the Obama standards by 2025 and slightly exceed them for the 2026 model year. However, some environmental groups believe that the new requirements from NHTSA under Biden don't go far enough to fight global warming.