The US senators said that at least 11 people have lost their lives in fatal crashes involving Tesla Autopilot since the company introduced the feature in 2015.A furore over this issue has been going on even outside the US where Tesla is being told it can’t use certain language around Autopilot.
By : HT Auto Desk
| Updated on: 19 Aug 2021, 10:04 AM 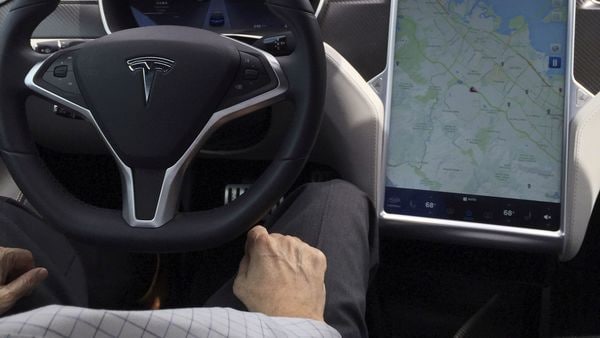 FILE PHOTO: The interior of a Tesla Model S is shown in autopilot mode in San Francisco, California, US.

Two US senators have written a letter to the Federal Trade Commission (FTC) to probe whether EV maker Tesla's use of “deceptive marketing practices" by calling the driver-assistance systems of its electric vehicles as ‘Autopilot’ and ‘Full Self-Driving’ (FSD).

Democratic senators Senators Richard Blumenthal and Ed Markey, in a letter to the FTC, wrote that Tesla “has repeatedly overstated the capabilities of its vehicles, and these statements increasingly pose a threat to motorists and other users of the road." They added that the EV maker's Autopilot and FSD features are not reliable as the company pitches them to be. “Tesla drivers listen to these claims and believe their vehicles are equipped to drive themselves - with potentially deadly consequence."

The letter by the senators comes couple of days after the US National Highway Traffic Safety Administration (NHTSA) launched an investigation into Tesla’s Autopilot after almost a dozen collisions at crash scenes with first-responder vehicles.

The written plea further mentioned that at least 11 people have lost their lives in fatal crashes involving Tesla Autopilot since the company introduced the feature in 2015. “Tesla and Mr. Musk’s repeated overstatements of their vehicle’s capabilities - despite clear and frequent warnings - demonstrate a deeply concerning disregard for the safety of those on the road and require real accountability," the senators wrote.

A furore over this issue has been going on even outside the US where Tesla is being told it can’t use certain language around Autopilot. In Germany, a court ruled last year that the EV maker had misled consumers and needed to change the way it marketed its vehicles.

Recently, Chinese EV maker Li Auto's CEO said that no automobile today is truly capable of fully autonomous driving and thus the common usage of such terms should be avoided. He also urged media and industry bodies to adopt a unified nomenclature for assisted and autonomous driving technologies.