Toyota says production at its facility in Karnataka has returned to a two-shift daily schedule.The launch of Toyota Urban Cruiser is expected to further bolster prospects.
By : HT Auto Desk
| Updated on: 01 Oct 2020, 01:29 PM 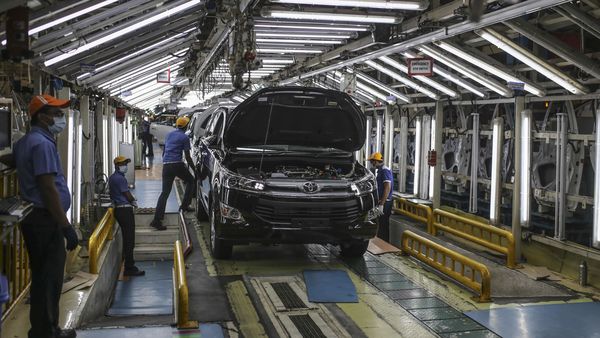 Toyota Kirloskar Motor on Thursday reported selling 8,116 units in September, a 46 per cent growth over wholesales in August. While this would be a welcome uptick in sales charts for a company that recently also launched Urban Cruiser, it still is short of the figures from a year ago when it had sold 10,203 units in the domestic market and exported another 708 units in the same time period.

September has indeed provided some method to madness for Toyota in India, a company that has had the going tougher than even some of its rivals. "September has been our best month so far, ever since the pandemic hit us in March 2020. Factors leading to this can be attributed to the pent up demand among customers as well as the onset of the festive season," said Naveen Soni, Senior Vice President, Sales and Service, Toyota Kirloskar Motor. "We are seeing demand pick up and a lot more confidence in our dealers, thereby witnessing a 14 to 18% growth in orders when compared to last few months."

What may also be helping Toyota's case is that production at its manufacturing facility near Bengaluru has now returned to a two-shift daily schedule. Previously, instances of positive cases among workers and restrictions imposed by the state government in select areas had taken a toll on production.

Toyota is also backing Urban Cruiser to help its process of recovery process, especially because it is competing in a very lucrative sub-compact SUV segment. "TKM also announced the launch of Urban Cruiser in September and we have got a very good response from our customers and the market, ever since we opened the bookings," said Soni.

This, however, does not mean that the path ahead is a bed of roses for the company. "We have to carefully look at the taxation system with regulation system parallel. If the taxation goes another direction, which is not supporting or not creating demand it is very difficult," Toyota Kirloskar Motor Managing Director Masakazu Yoshimura had told news agency PTI. (Full report here)

Toyota, however, says it is committed to the Indian market and is appears determined to bring in facelift and updated products in the times to come.