Timeless Bugatti, literally: $280,000 watch gets a functioning W16 engine inside

The price tag the watch commands is good enough for several other super cars but none that Bugatti would really consider as a direct rival.
By : Shubhodeep Chakravarty
| Updated on: 10 Apr 2020, 01:33 PM 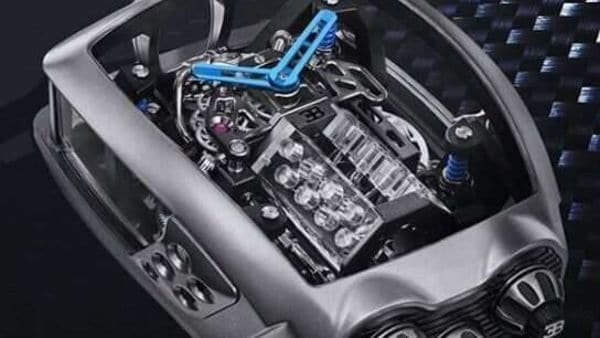 Bugatti is known the world over for its audaciously expensive yet amazingly powerful super cars that tend to turn heads and often raise eyebrows as well. And while the super cars often end up as objects of envy, it is a watch made as an ode to the car maker which has garnered a whole lot of attention.

While Bugatti super cars start at around $1.1 million, the Bugatti watch is a whole lot more 'affordable' at $280,000. Named Bugatti Chiron 16 Cylinder Tourbillon after the Chiron super car from the French manufacturer, the watch has been made by Jacob and Co, and features as many as 578 pieces inside. This includes a sapphire stone which is balanced by four replicas of car shock absorbers. According to Motor1, the watch has a battery life of 60 hours indicated by a 'full reserve' sign. Pushing the right top crown of the watch turns the crankshaft and the 16 piston pumps come to life, just as they do in an internal combustion engine. The company states that the two 'turbochargers' on the side spin to add to the visual appeal.

As amazingly extravagant as all of these may be, the highlight of the watch is the functioning W16 engine inside that truly epitomises the Chiron it pays respects to.

The price tag the watch commands is good enough for several other super cars but none that Bugatti would really consider as a direct rival. And while it is not clear how many of these watches have either been made or will be put up for sale, it is not the first time that Jacob and Co has gone down this path. The luxury watch maker has previously taken out Twin Turbo Furious and Epic X Chrono models although these were far less expensive than the Bugatti Chiron 16 Cylinder Tourbillon's price tag.