Home Auto News This World's Biggest, Most Expensive Rv Was Once Owned By Will Smith

This world's biggest, most expensive RV was once owned by Will Smith

This recreational vehicle is called Studio Mobile Estate and it is worth ₹18.5 crores. It comes with 14 televisions and 30-person private screening space.
By : HT Auto Desk
| Updated on: 01 Jan 2022, 05:06 PM 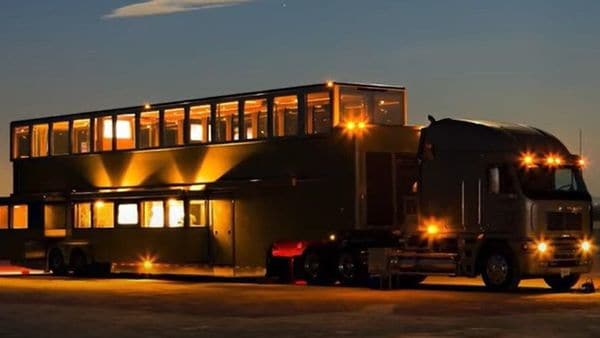 Screengrab from the video posted on YouTube by Barcroft Cars.

Luxurious recreational vehicles have always been fascinating as one tries to top the other with one-of-a-kind interiors or the latest technical feature, but what happens when an RV with 1,200 square feet of living space equivalent to a modest house enters the arena. And what if you get to know that it was custom-build for popular Hollywood actor Will Smith. It surely does take the game to the next level.

A video shared by Barcroft Cars on YouTube shares the details of the gigantic and opulent RV. Based on the description on the social media site, it is the biggest, tallest, widest and most luxurious recreational vehicle in the world. It comes in form of a full-size semi-trailer with multiple pop and slide-outs on the sides. Its roof can also lift upwards giving way to a functional second floor. Texas-based Ron Anderson, has designed and created the two-storey trailer. The maker calls this vehicle the Studio Mobile Estate. The description also informs that Anderson has been creating RVs for actors for the past 20 years. He said that Smith contacted him and said that he wanted something unique, to which Anderson responded that he has exactly the one he might be in search of.

(Also read | RV with second floor and XXL bed? Luxury on wheels may never be the same again)

The recreational vehicle comes with granite surfaces that cost around $125,000 while the expense on the kitchen stood at $200,000. The RV which is worth $2.5 million which is approximately around ₹18.5 crores is packed with electronics as well. It has 14 televisions and a 30-person screening room. It also comes with a private hair and makeup space for the user. The master bedroom has a bed that can also be converted into a couch.

(Also | Watch: This LEGO expedition camper truck in reality would be a major craving)

At present, Anderson owns the RV again and it is not catering service to any actors as such. If one is interested to take a sneak peek into the premium Hollywood lifestyle, this massive motorhome is available for rent for a sum of $9,000 per night.