Home Auto News This Ford Festiva Converted Into A Lawnmower

This Ford Festiva converted into a lawnmower 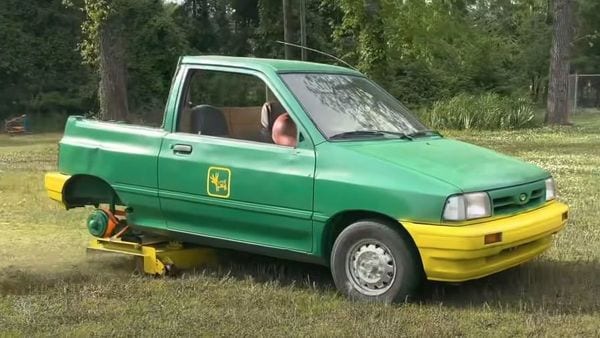 The Ford Festiva has been modified into a lawnmower by cutting the rear profile. (Image: YouTube)

Car modification is something that has come a long way. While some people modify their vehicles for fun and entertainment, some do it for utility. Here is YouTuber Ginger Billy who took the matters into his own hands and modified a Ford Festiva into a lawnmower.

According to Ginger Billy, the reason behind the project is to make life easier when working on his lawn. At the first glimpse, it looks like the Ford Festiva has been transformed into a pickup truck, but if you take a close look, the rear wheels have been taken out and the axle is connected to the mower.

The rear of the modified Ford Festiva has been cutaway to produce a cargo bed where a 600 cc Briggs and Stratton lawnmower engine has been placed, which generated power for the mower blades at the back.

Instead of a conventional pull-start, the mower can be started from the driver's cabin with an ignition key positioned in the center console. The driver can enjoy the air conditioning as well, which is an added advantage, as compared to the open conventional lawnmowers. This means no sweating, no sunburn while mowing the lawn. There is a kill switch as well, in case anything goes wrong with the B&D motor.

Interestingly, this is not the first time Ginger Billy has built a lawnmower. However, this one is certainly one of the most advanced projects he took.