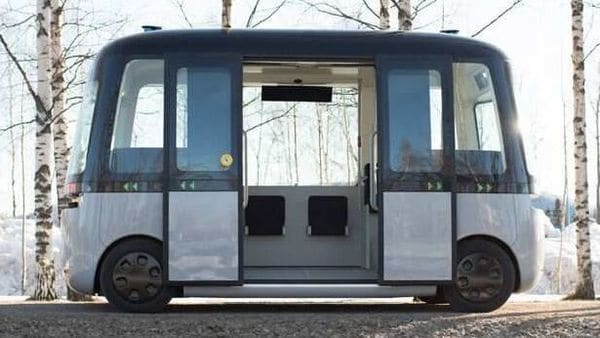 Sensible 4, a Finland-based self-driving technology company, has launched its electric autonomous bus as part of a fleet of self-driving vehicles for public transport. The bus, called GACHA, is world’s first self-driving shuttle bus for all weather conditions.

The company, in collaboration with Japanese lifestyle retailer MUJI, designed these buses. The company hopes these autonomous electric buses can cope with the complex real-world situation when it comes to public transport.

The shape of the bus was inspired by the the Gacha toy capsule, familiar to many people in Japan. It comes with autonomous driving sensors, radars, 360-degree camera vision, high precision GPS among others. It has a capacity for 10 people to seat, while 6 more can stand during a short trip.

This electric 4WD can travel as fast as 40 kmph and has a range of more than 100 kms in single charge. It comes with fast charging with wireless charging as an option.

The bus is now part of a pilot project which was launched in Helsinki earlier this month. A successful pilot will take the company one step closer to bringing autonomous driving technology to the mainstream. Three different driverless vehicles, all equipped with Sensible 4’s autonomous driving software and technology, are operating on the busy streets of Pasila in Helsinki.

The new business district of Pasila, close to the centre of Helsinki offers a complex testing environment for self-driving vehicles. The heavily trafficked district provides unique opportunities to test self-driving in an area with lots of complex traffic situations such as pedestrians, bicycles, trams and one of the city’s main train stations. Usually, self-driving pilots are held in restricted safe-zone – areas that offer few issues for the vehicles as possible.

“Self-driving fleet operations on public roads in urban areas are really demanding for any autonomous technology. We will learn a lot during these 50 days of the Helsinki-pilot, and this, of course, is for the benefit of our customers“, says Jari Saarinen, Chief Technology Officer, Sensible 4.

As part of the project, the bus will pick up passengers from the bus stops on the predefined route. At times, it will stay dormant, and users can hail the shuttle with an application on their phones. As soon as coronavirus lockdown is eased, self-driving enthusiasts will be able to try the driverless shuttle and order it with their phone.

Besides GACHA, Chinese car maker-giant Dongfeng Motor Co. Ltd. has sent one of their vans to participate in the pilot. The CM7 minibus has been retrofitted with Sensible 4 autonomous driving software and will showcase its smooth and flexible driving capabilities as part of the project.

Besides the CM7 and GACHA, a third vehicle by Sensible 4 is taking part in the operations. The Renault Twizy will collect data aimed to improve the overall experience of the software and learn from the complex traffic situations.

The Remote Control Centre or RCC is another essential part of the new pilot. There will be multiple video feeds sent from the autonomous vehicles to the remote control centre.