PTT plans to invest $1 billion to $2 billion over the next five to six years in a facility to produce smart chassis for EVs, said senior executive for innovation, Noppadol Pinsupa.In May PTT announced a partnership with Taiwan's Foxconn on EV production.
By : Reuters
| Updated on: 17 Aug 2021, 08:39 PM 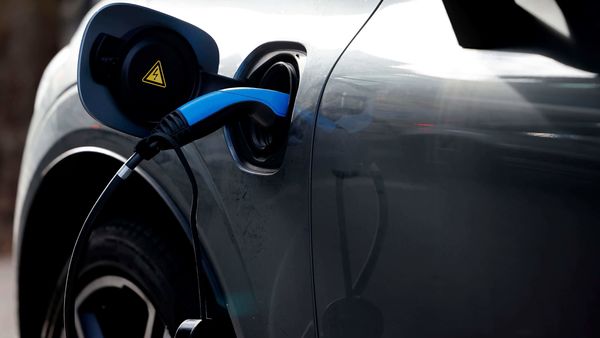 A charging cable is pictured plugged into a Volvo electric vehicle (EV), parked in a parking bay reserved for electric vehicles, in London on November 18, 2020. (Representational Image)

Thailand's state-owned PTT Pcl is setting its sights on a future in electric vehicles (EV) and more renewable power, its top executive said on Tuesday.

"We have a new vision," Auttapol Rerkpiboon said, laying out plans for growth and increasing its renewable power target to 12 gigawatts (GW) by 2030, from 8 GW previously.

"Energy has arrived at a point of change, moving more towards renewables, and fossil fuels are contributing to climate change - its time we adjust our vision."

PTT also targets 9 million tonnes of liquefied natural gas per year and reach 8 GW of electricity from conventional sources by 2030. It plans to have at least 30% of net income from new energy and business sources like EV, life science and logistics by 2030, Auttapol said.

In May it announced a partnership with Taiwan's Foxconn on EV production.

PTT plans to invest $1 billion to $2 billion over the next five to six years in a facility to produce smart chassis for EVs, said senior executive for innovation, Noppadol Pinsupa.

It could become a regional export centre, he added, building on Thailand's position as Asia's fourth-largest autos assembly and export hub. Thailand is a production base for top carmakers, such as Toyota and Honda.

"The factory will be able to produce an EV and the smart chassis, the key technology in an EV that manages electricity," CEO Auttapol said.

"Auto brands who have not developed this can order it from us."

"There will continue to be investments at home and abroad," Auttapol said, adding cashflow was sufficient, with room to borrow more.