Tesla is building its first European factory outside the German capital and aims to eventually build 500,000 electric vehicles there.
By :
| Updated on: 18 Oct 2020, 12:38 PM 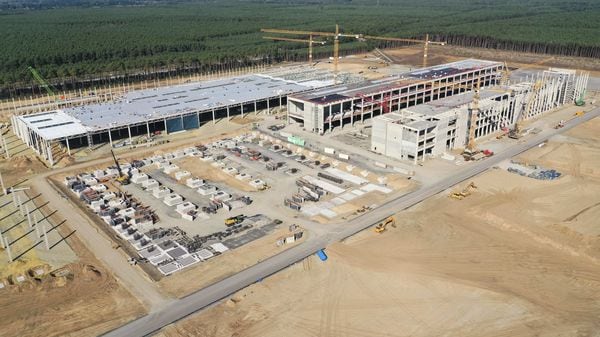 Construction cranes stand among building structures at the Tesla Inc. Gigafactory site in this aerial view in Gruenheide, Germany.

Construction at Tesla Inc.’s plant in Gruenheide, Germany, can restart after the water was turned back on, German water provider Strausberg-Erkner told Germay’s Manager magazine.

Unpaid bills from the carmaker prompted the shut-off. The payment has been received and workers are on their way to lift the blockade, Sandra Ponesky, a spokeswoman of the Strausberg-Erkner water board, told the magazine.

Tesla is building it first European factory outside the German capital and aims to eventually build 500,000 electric vehicles there.