Tesla is fast tightning its grip in UK's growing EV market even though the likes of Volkswagen and Kia are hot on its heels.
By : HT Auto Desk
| Updated on: 06 Jul 2021, 10:00 AM 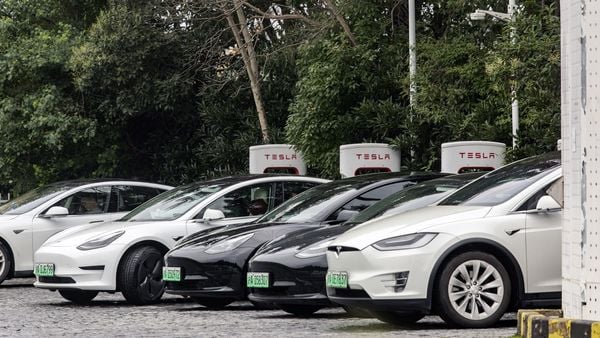 File photo of Tesla cars parked at a Supercharger station.

The United Kingdom is emerging as a major hub in Europe for electric vehicles (EVs) and Tesla is right in the middle of the thrust for making battery-operated vehicles more popular than ever before. Such has been the rise in this popularity of EVs here that the market share of battery-powered vehicles now stands equal to that of diesel vehicles - 11%.

It is reported that Tesla delivered 7,304 electric cars in the UK in the first quarter of 2021. This resulted in a jump in market share of EVs in the country to the same level as that of diesel vehicles, a first ever here. Petrol vehicles still enjoy a mammoth share of the market with Electrek reporting a figure of 55%, followed by 23% for hybrid vehicles. And while Volkswagen and Ford dominates the petrol vehicle space in the country, and Toyota has the bragging rights when it comes to hybrids, it is Tesla that - quite unsurprisingly - taken the lead in the EV segment. This segment also includes Volkswagen, Kia and several other players. In the diesel segment, Mercedes-Benz, Audi and Volkswagen have a nearly equal market share.

With the UK looking at all new car sales to be all electric by 2030, there is massive potential for growth for Tesla, as well as others who are or will offer EVs here. And while Tesla doesn't yet have a factory in the country and has to ship right-hand drive models here, CEO Elon Musk has made several trips in the recent past to scout for locations for a proposed UK Gigafactory.

Will the competition only hot up in the times to come? Most industry experts agree that Volkswagen is likely to intensify its plans of closing the gap with Tesla while others like Kia, Audi, Hyundai, MG, Renault, Volvo and Nissan could play a role greater than what is at present. Interestingly, Nissan recently revealed plans of establishing an electric vehicle hub worth £1 billion here.

As such, the UK is clearly being seen by many as the next big battlefield for EV makers to fight each other.