The National Highway Traffic Safety Administration (NHTSA) has asked Tesla for records of any crash that may have been tied to the video game feature.
By : HT Auto Desk
| Updated on: 26 Jan 2022, 09:38 AM 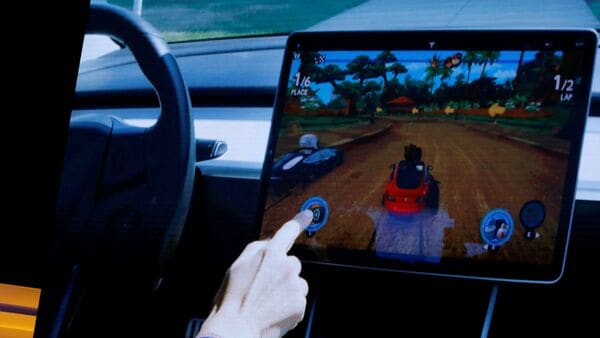 The US auto safety agency has sought additional information from EV giant Tesla in its probe into 580,000 of the company's vehicles for allowing drivers and passengers to play video games on the front center touchscreen even while the car is in motion.

The National Highway Traffic Safety Administration (NHTSA) has asked for records of any crash that may have been tied to the feature and for Tesla to provide a chronology of events and studies regarding its risk assessment "in employment of front seat non-driving related tasks from in-vehicle based devices even if the task is intended only for front seat passenger."

The EV company has time until March 4 to answer these questions along with providing "trip counts in which game use occurred while the shift indicator was in drive". It also has to provide information on usage where vehicle sensors did not detect an occupant in the front passenger seat. It also has to provide data where "gameplay was concurrent with any driver intervention measures or active safety measures."

The agency had opened a preliminary probe last December into 2017-2022 Tesla Model 3, S, X, and Y vehicles over the company's Passenger Play feature that it believed could distract the driver and increase the risk of an accident. NHTSA also confirmed that motion playing has been available since December 2020 in Tesla 'Passenger Play'-equipped vehicles. Before then, the game feature was enabled only when the vehicle was parked.

Following the probe, Tesla told NHTSA that it would stop allowing video games to be played on vehicle screens while the car is in motion, adding that a software update will lock the "Passenger Play" feature in the vehicles when it is moving.