Hyundai Motor Co's biggest manufacturing unit located at Ulsan came to a pause due to a shortage of components last week after the truckers went on protest.
By : HT Auto Desk
| Updated on: 13 Jun 2022, 01:45 PM 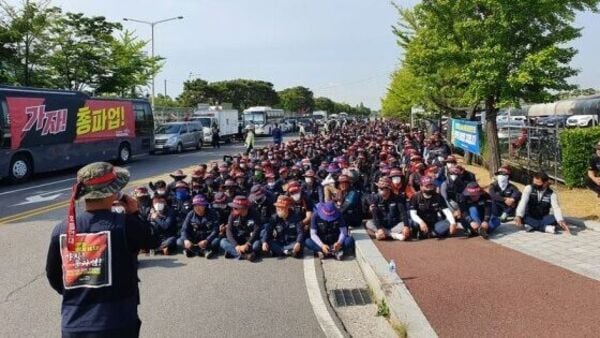 Members of the Cargo Truckers Solidarity union attend a protest in front of Hyundai Motor's factory in Ulsan, South Korea.

A strike called by thousands of South Korean truckers entered the seventh day as the participants continue to protest against rising fuel costs. According to a report by Reuters this strike has disrupted production at many factories and has caused lagging works at ports. It may also pose a new risk to the already strained global supply chain.

A previous report stated production at Hyundai Motor Co's biggest manufacturing unit located at Ulsan came to a pause due to a shortage of components last week after the truckers went on protest. Around 1,000 truckers started the strike at the automaker's production unit on Friday. As per the latest reports, Hyundai carried a few extra shifts over the weekend to clear backorders. The automaker admitted there was disruption, however, it declined to give details. Hyundai expressed hope of going back to a normal schedule as soon as possible.

Hyundai's Ulsan factories manufacture 6,000 vehicles daily, the union said in the report. The strike had cost the automaker 4,000 to 5,000 vehicles as of Friday, worth up to 235 billion won ($182.65 million). The report also mentioned some employees at Kia Corporation were using newly assembled cars to make deliveries.

The ongoing global semiconductor shortage which seems to be easing now might again get impacted as truckers have planned to stop shipments of raw materials for semiconductors produced in Ulsan, stated a union official Park Jeong-tae. However, an official of one major tech manufacturer informed that there might be no significant disruption in the near term given the status of inventories of raw materials.

Coming to steel which is also one of the major components in the auto industry is also up for some fresh disruption as Steelmaker POSCO Holdings Inc said the strike had halted shipments from two plants by about one-third, or 35,000 tonnes a day. This might lead to production halts if the supply side tilts negatively.