Stellantis and Foxconn have announced their auto partnership on Monday.Details of the partnership is yet to be made public.
By : HT Auto Desk
| Updated on: 17 May 2021, 02:36 PM 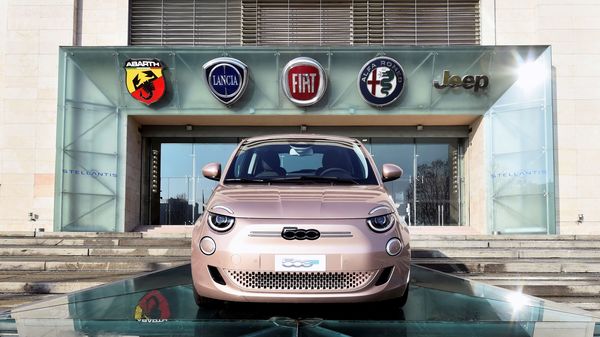 The logo of Stellantis, the world's fourth largest automaker after Fiat Chrysler and PSA finalised their merger, is seen next to a car displayed. (File Photo)

World's fourth largest vehicle manufacturing company Stellantis has officially joined hands with Foxconn, a company known to manufacture iPhones for Apple, in a partnership that aims to build electric cars in future.

On Monday, the two companies said in a joint statement that the they will hold a conference call on Tuesday to introduce the partnership. Stellantis CEO Carlos Tavares and Foxconn Chairman Young Liu will be among those who will attend the press conference to share details on the partnership. Both companies have been discussing a joint venture for electric vehicles recently.

At the beginning of this year, Fiat Chrysler merged with French Peugeot manufacturer PSA to create Stellattis as one of its main goals to relaunch products in China.

The announcement comes days after Foxconn tied up with another US-based electric vehicle startup Fisker last week. Fisker has named this partnership as Project Pear with a goal to produce affordable electric vehicles, and is likely to begin production in the next two years.

Hon Hai Precision Industry, Foxconn's parent company and the main assembler of Apple’s iPhones, made its automotive ambitions known more than a year ago, when it announced plans to establish an electric vehicle joint venture with Fiat Chrysler. Efforts to finalize the partnership were put off by the automaker’s merger with PSA Group to form Stellantis, which was completed in January.

In October, Hon Hai unveiled its first electric vehicle chassis as well as a software platform aimed at helping EV makers get models to market faster. The company also outlined plans to release a solid-state battery by 2024.