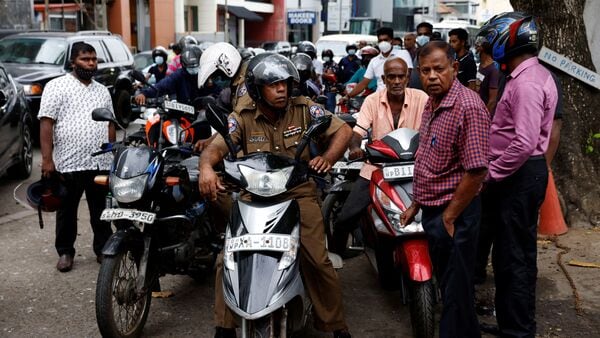 Sri Lankans have been urged not to overcrowd fuel stations in the country as the fuel distribution process for vehicles as per the QR code system.

Sri Lanka will launch a QR code which will be required every time one goes to a petrol pump to refuel. The island nation, grappling with low fuel reserve amid ongoing economic crisis, has capped amount of petrol and diesel that can be refuelled. The government has urged consumers not to make a beeline outside petrol pumps to fill up their tanks. They have been asked to use the new QR code at petrol pumps for refuelling purpose based on the quota decided for each category of vehicles.

According to the fuel quota implemented by Sri Lanka, two-wheelers will get 4 litres while three-wheelers will receive 5 litres of fuel every week. Four-wheelers will be allowed 20 litres of fuel every week while heavy vehicles will be given 40-50 litres of fuel. Kanchana Wijesekera, Sri Lanka's Minister of Power and Energy, said, "The National Fuel Pass QR code system will be implemented from tomorrow at fuel stations across the island. The last digit of the number plate and other systems that were in place earlier will not be valid from tomorrow (August 1)." Fuel distribution under Sri Lanka's National Fuel Pass will be prioritised for fuel stations that have adopted the QR code system. Vehicles registered for the National Fuel Pass, are allocated with a QR code after the chassis number and other details are verified. On Monday, vehicles which have 6, 7, 8 or 9 as the last digit on registration plates will be allowed for refuelling.

The system was introduced to ensure that Sri Lanka does not run out of fuel amid people filling up their tanks in fear of price inflation. The island nation had reached a stage when it almost ran out of diesel, before India stepped in to help.

The National Fuel Pass was initiated from July 21 until July 24 at a handful of petrol pumps in Colombo and other districts on a trial basis. "All arrangements are in place to launch the distribution process by scanning the QR code from today. The fuel will be issued for a maximum of Rs. 1,500 for motorcycles, Rs. 2,000 for three-wheelers and Rs. 7,000 for other vehicles during the course of next week until the fuel permit takes effect," said the Ministry of Power and Energy.

According to report, Sri Lanka's petrol reserves is unlikely to sustain too long and is not enough to meet domestic demands. The fuel restrictions will remain for one year at least before the nation can expect to find its way out of the ongoing crisis.