Home Auto News Space, Pace And Grace, The Fully Electric Jaguar I Pace Has It All

Space, pace and grace, the fully-electric Jaguar I-Pace has it all

The all-electric Jaguar I-Pace is a sign of all things to come from the British carmaker’s stable. It is the brand’s first-ever fully electric model, and one that sets the course for the Jaguar of the future.
By : Autocar
| Updated on: 09 Jun 2018, 09:51 AM 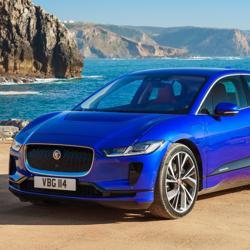 The Jaguary I-Pace has little common with any Jaguar to date. It’s new from the ground-up and comes built on a new EV architecture.

This is the most revolutionary car in Jaguar's production history. It is the British carmaker's first-ever fully electric model, and one that sets the course for the Jaguar of the future. What you see here is the final production-spec electric SUV. Deliveries begin soon - which means that by the time the first I-Paces start being driven about by customers, the Jaguar model will have no equal rival from Audi, BMW and Mercedes-Benz. There is the Tesla Model X electric SUV - but then it's a whole lot larger than the I-Pace.

The I-Pace has little common with any Jaguar to date. It's new from the ground-up and comes built on a new EV architecture, at the core of which is a skateboard chassis that positions the 90kWh lithium-ion battery pack under the cabin floor. Thanks to the heavy battery pack positioned low, the I-Pace boasts a centre of gravity far lower than any traditional, combustion engine SUV. Motive power on the I-Pace comes from two electric motors - one at the front axle and one at the rear axle - that produce the equivalent of 200hp and 348Nm of torque apiece, or a combined 400hp/696Nm. The motors are compact (the drive shafts pass through them) and light (they weigh 80kg each), and having one at each end has, in part, contributed to Jaguar achieving an ideal 50:50 front-rear weight balance on the I-Pace. The I-Pace is no lightweight, though - it weighs in at 2.2 tonnes (2,200kg). Jaguar also says that the I-Pace's aluminium body is the most rigid of any Jag yet. Jaguar claims range of 480km in the WLTP cycle on a full charge. Home-charging with an AC wall box takes 10 hours to charge up to 80 percent. DC rapid charging gets the charge up to 80 percent in 40min. 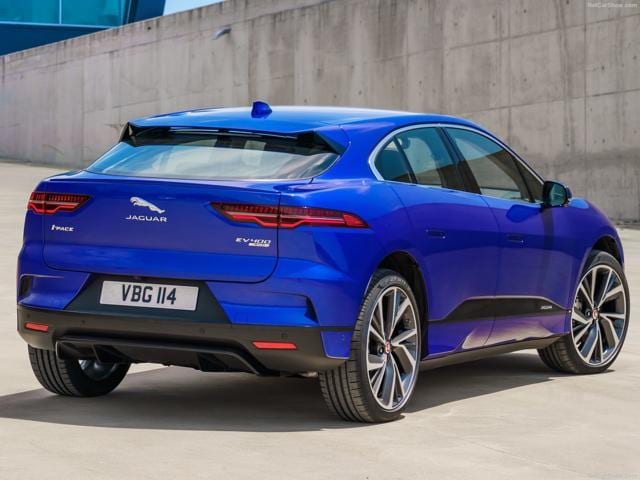 Aside from the familiar shape of its grille, headlights and tail-lights, the I-Pace looks nothing like Jaguar's other models - and it all comes down to the proportions. While the I-Pace may be marketed as an SUV (and even meets certain regulations abroad to classify as one) it doesn't particularly look the part. The bluff nose, low roof and smoothly raked tail are more indicative of a high-riding, high fashion hatchback than a tough, imposing SUV.

Clever details abound on the I-Pace. Vanes on the grille open when cooling is required, but close when not needed, so as to redirect air to the large bonnet scoop to smoothen air flow over the body. Air is also channeled through openings in the bumper to reduce turbulence in the wheel wells while the wheels themselves are designed for minimal drag.

It is a slight drop into the I-Pace's cabin and once in position on the sporty driver's seat, you immediately get the feeling that this is not your ordinary Jaguar. The windscreen, for one, extends far forward, almost MPV-like. There is also a tremendous sense of space on the inside, and what undoubtedly helps further the impression on our test car is the optional glass roof, which is as large as they come. The glass absorbs infrared light and does away with the need for separate blinds to keep the heat out. In effect, you and your passengers get an unhindered view of the world above.

The I-Pace's dashboard is new-age Jaguar and features JLR's latest Touch Pro Duo dual-touchscreen infotainment system. Commonly accessed functions such as navigation and audio are accessed via the top screen while climate control and other functions are operated via the lower screen. It does take some time to get used to the arrangement but thankfully Jaguar has retained chunky knobs for temperature control settings. Digital instruments that let drivers switch between screens are standard, while top-trim cars get a head-up display, too. 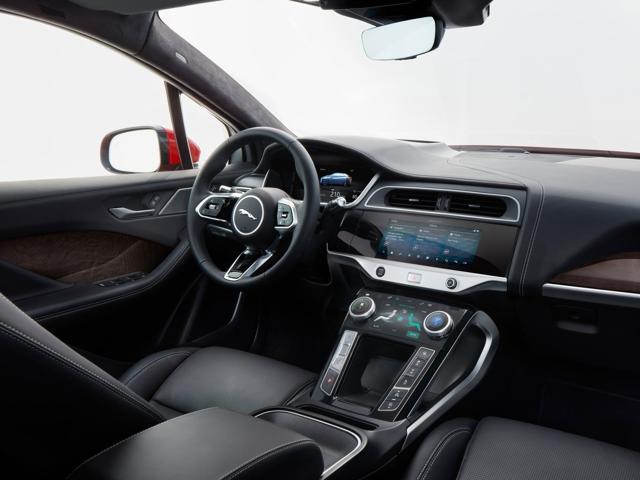 At the back, there's impressive legroom. Think Cayenne space in a Macan-sized SUV, and you'll get the idea. It feels really airyand the seat is comfortable, too. However, if there's something to bring up it's that taller passengers will find the seating position slightly knees-up.

Boot space is a massive 656 litres with the rear seats in place; but with the rear motor residing under the boot floor, there's no provision for any spare wheel, whatsoever. The I-Pace also gets what Jaguar designers have cheekily named the 'froot' - a 27-litre storage binnacle under the bonnet. There's lots of storage in the cabin, too, with a recess under the arms of the lower portion of the centre console, as well as a sizeable 10.5-litre compartment between the front seats.

Press Start, wait for the 'Ready' icon to light up on the instruments, push D on the button-operated gear selector and you are good to go. No vibration or sound of an engine coming to life, obviously. You do get used to the silent progress in town but to make the transition from conventional car to EV that little bit easier, Jaguar has also added-in a switchable creep mode that lets the car roll forward. There are also two levels for regenerative braking. Regenerative braking set to 'High' is akin to strong engine braking; and the braking force on releasing the throttle is so strong that you seldom need to use the brake pedal, even to come to a standstill. The system really makes driving a single-pedal affair.

Around town, the I-Pace feels brisk, responsive and easy to live with, but also a bit unemotive. It doesn't quite talk to you like a 400hp Jaguar should. Out on Portugal's motorways, too, the I-Pace felt (for the lack of a better word), distant. It does everything you want it to - it's fast and incredibly quiet (I'm talking road and wind noise, here) but it never quite sucks you into the experience. The build of speed is superb but it's also a bit uni-dimensional - in the sense that motor responses are identical whether you accelerate from 30-80kph or 100-130kph. Traditionalists sure will miss the sounds and response through the gears that give combustion engines 'personality'. It may be robotic, but the I-Pace is not slow. Jaguar claims a 0-100kph time of 4.8sec.

Where the I-Pace undoubtedly impresses is in ride comfort. Ride quality is brilliant, and it's amazing how little of the potholed surface in the countryside made it to the cabin. Air suspension is an option, and on the standard steel springs too, the I-Pace feels amazingly absorbent. Even on the worst of patches, there's no road shock at the steering wheel and no shudder at the body. Body movements are also really well contained. 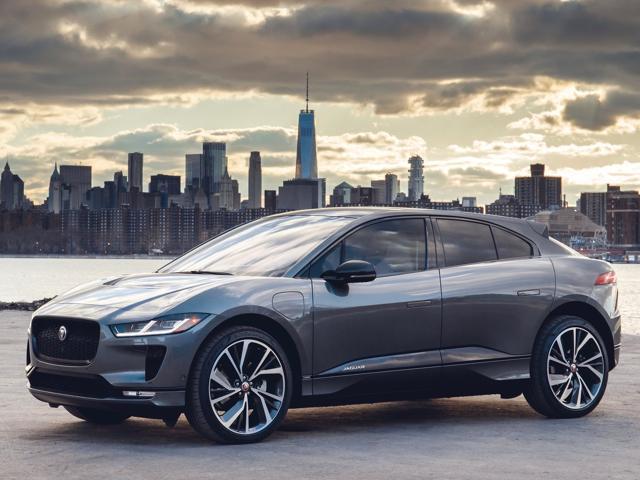 The I-Pace is quite adept off-road, too. It wades through 500mm of water and doesn't wince over steep ascents or lose its footing on gravel tracks we drove on. In the rough, you'll do well to use All Surface Progress Control that modulates the throttle to keep steady momentum. All you need to do is steer.

The thing is, you can't. Jaguar is ready with the car but will not bring it to India up until the country's charging infrastructure is up to speed. We are looking at a good few years before you can buy the I-Pace in India, then. For us, the I-Pace is more of a demonstration of the broad direction Jaguar is headed in. The future is electric and, if the I-Pace is anything to go by, Jaguar is clearly ready for it. Yes, the I-Pace is lacking in emotion, at some level, but that is true for all EVs, barring none. What the I-Pace does is deliver most (not all), of what we like about Jags, bundled in a future-proof package. Space, pace and grace - the I-Pace has it all.