French carmaker Renault has handed over its Russian assets to the Russian government. This is the first nationalisation of any carmaker operating in the country since the sanctions over Moscow's military campaign in Ukraine kicked in.
By : HT Auto Desk
| Updated on: 17 May 2022, 10:42 AM 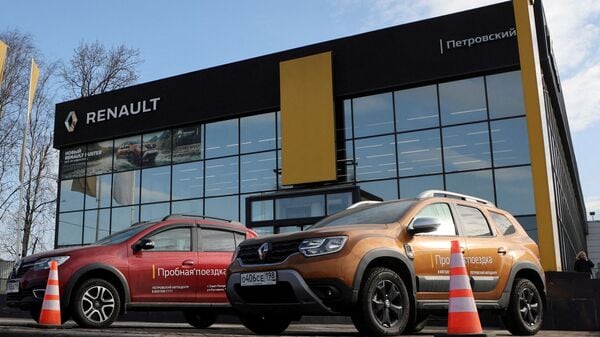 Renault cars are parked outside a showroom in Saint Petersburg, Russia. (File Photo)

French carmaker Renault has announced the sale of its majority stake in AvtoVAZ, the Russian vehicle manufacturer that owns the Lada brand. The stake amounts to 67.6 percent and will be sold to NAMI, the Russian state institute for automobile and engine research and development. The development is seen as a direct fallout of the ongoing Russia-Ukraine war, which has led to suspension of production and sanctions from several global carmakers operating in the country. Renault is the first to sell off its assets to the Russian government before officially exiting business.

"Today, we have taken a difficult but necessary decision; and we are making a responsible choice towards our 45,000 employees in Russia, while preserving the Group's performance and our ability to return to the country in the future, in a different context. I am confident in the Renault Group's ability to further accelerate its transformation and exceed its mid-term targets," said Luca de Meo, CEO of the Renault Group.

The entire share stock of Renault in Renault Russia, the group's wholly-owned local division, will go to the authorities of the city of Moscow. In a statement, Renault said the closing of these transactions is not subject to conditions and that all necessary approvals have been obtained.

Renault has also has confirmed a non-cash write-down of nearly $ 2.2 billion that reflects the possible costs of suspending operations in Russia. Leaving Russia, which was Renault's second largest market after Europe, will cost the French carmaker around 10 per cent of its turnover.

Excluding the activities of AvtoVAZ and Renault Russia, the group's revenues in the first quarter of 2022 were 8.9 billion, 1.1 percent less than in the same period of 2021.