Royal Enfield to launch Hunter 350 on this date 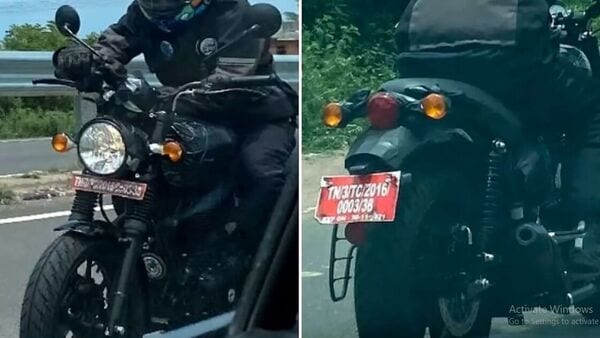 The Hunter 350 will have a roadster type body style.

Royal Enfield is working on introducing its most affordable motorcycle in the line-up. It will be called Hunter 350 and according to the new teaser, it will be launched on 7th August. From the leaked spy shots, it is already known that there will be multiple variants of the Hunter 350. According to some reports, the variants will be called Retro, Metro and Metro Rebel.

The base variant will be offered with spoked wheels with tube-type tyres, single-channel ABS, rear drum brake and halogen turn indicators. The higher variants will get LED turn indicators, alloy wheels and dual-channel ABS. There is also a possibility that the LED turn indicators are offered as an official accessory by the manufacturer. Apart from the features, there will also be a difference in the paint schemes.

Royal Enfield will also Tripper navigation system as an accessory with the Hunter 350. The switchgear and the instrument cluster will be borrowed from the Scram 411 and the Meteor 350. The Hunter 350 will be based on the J-platform which is already being used on the Classic Reborn and Meteor 350.

The engine will also be the same 349 cc, single-cylinder, long-stroke unit that gets air-oil cooling. It produces 20.2 bhp of max power and 27 Nm of peak torque. It will come mated to a 5-speed gearbox. The manufacturer might change the tuning of the engine to suit the characteristics of the new motorcycle. The engine and the exhaust are finished in black. While the engine might be the same, the exhaust system is all new.

Royal Enfield Hunter 350 will measure 2,055 mm in length, 800 mm in width and 1,055 mm in height. The wheelbase of the new motorcycle is 1,370 mm which is shorter than the Classic 350 as well as the Meteor 350. The motorcycle is expected to be a good handler considering that it weighs less than other motorcycles based on J-platform.