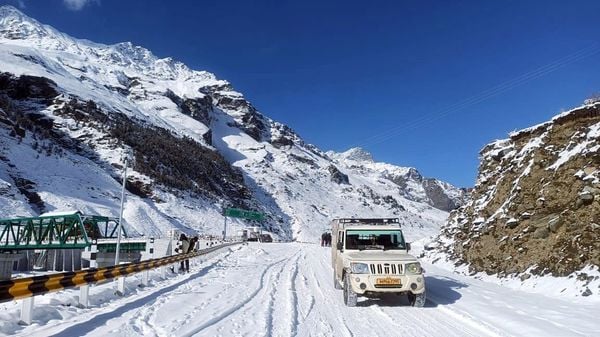 Vehicle travels on the snow-covered road following heavy snowfall near the North Portal of Atal Tunnel, Rohtang, at Manali, in Kullu

A record number of vehicles crossed the all-weather Atal Tunnel road on the first day of the new year. A total of 7,515 vehicles crossed the tunnel road beneath the 13,058-foot-high mountain in Himachal Pradesh’s Rohtang Pass within 24 hours on January 1, Lahaul and Spiti Superintendent of Police Manav Verma said, PTI reported.

This is the highest number of vehicles to have crossed the Atal Tunnel in a single day after it was inaugurated on October 3, 2020 by Prime Minister Narendra Modi. Estimatedly, over 60,000 people crossed the tunnel on January 1 in these vehicles.

The Atal Tunnel, located at an altitude of above 10,000 feet, is the world's longest tunnel. The 9.02-km underpass connects Lahaul of Lahaul-Spiti district and Manali of Kullu district in Himachal Pradesh. The tunnel reduces distance between Manali and Leh by 46 kilometres and the time by about four to five hours. It has been designed for traffic density of 3,000 cars and 1,500 trucks per day.

The tunnel has a speed limit at the entrance, which has been fixed at 40 km per hour and that inside tunnel is at 60 km per hour. Digital speed indicators have been installed through the tunnel for consistently reminding drivers of their speed. Traffic violations inside the tunnel are kept in check with the help of automatic vehicles' number reader cameras and motor-bike borne traffic interceptors that have been installed inside the tunnel.

Since its launch in October of 2020, the all-weather Atal Tunnel has become a prime tourist destination.