The Range Rover Sport SVR review: Likely to be priced at ₹2 crore (ex-showroom), here’s our first impression of the revamped SUV in full-blown SVR guise.
By : Autocar
| Updated on: 05 May 2018, 09:11 AM 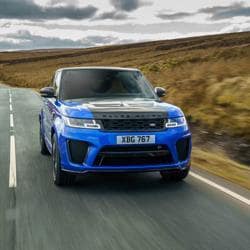 The Range Rover Sport SVR is Land Rover's fastest and most powerful SUV yet and is built by Jaguar Land Rover's Special Vehicle Operations (SVO) division. The car was first launched in 2015 and now gets a mid-life facelift, which includes a few styling tweaks, more equipment and more power. In fact, JLR's updated 5.0-litre supercharged V8 engine, which now develops 575hp (a hike of 25hp), is the most powerful engine in the range, with enough grunt to propel this 2300kg SUV from 0-100kph in just 4.5sec.

The updated look includes a choice of new, bright colours, which distinguishes the SVR from the rest of the range, while the Carbon Fibre Exterior Pack adds carbon-fibre accents to the front bumper, grille, fender vents, mirror covers and tailgate. The massive bonnet, too, is finished in carbon fibre, which looks a bit overdone on an SUV this big, but what does work is the pair of massive cooling ducts on the bonnet that conveys the power of the big motor below the hood.

Other design tweaks include a new bumper with bigger air vents for improved cooling for the more powerful brakes, and the rear bumper is new too, as are the sportier-looking four exhaust tips, Unsurprisingly, the SVR also gets the design changes effected on the rest of the Range Rover line-up. The grille is new and the new 'pixel' LED headlights are a touch slimmer, but what's distinctive is the new daytime running light design, which makes it easy to distinguish the facelift from the previous car. The SVR is available with 21 or 22-inch alloys in two colours. The optional 22-inch shiny black alloys on our test cars looked simply fantastic and complemented the SVR's sporty credentials.

The first thing you'll notice in the cabin is the Touch Pro Duo infotainment system borrowed from the Range Rover Velar. This brilliant twin-screen setup with its sharp, high-resolution graphics, now offered across the Range Rover Sport range, is so good to use that it's reason enough to consider the facelift over the previous car. The sports seats at the front are all new too and are made from lightweight materials that slash weight by a significant 30kg. They are hugely supportive and keep you nice and snug, especially while cornering. The slim frames of the front seats free up more space in the rear, increasing the already generous legroom. In fact, the overall sense of space is second to none; the high seating position, the low window line and panoramic sunroof make this one of the airiest cabins with fantastic all-round visibility.

The seats are finished in top-quality perforated Windsor leather and the revised interior trim (there's a new two-tone colour scheme) ups the luxury quotient of the Range Rover Sport. There are nice little exclusive touches as well, like the SVR logo embossed on the headrests, SVR-branded tread plates that illuminate as the driver climbs aboard, and the drilled aluminium pedals. This is a truly high-quality cabin and owners won't feel short-changed once they step inside.

A country road, a slushy off-road course, an airfield converted into a test track, rain and shine, are the perfect conditions to test the dynamic versatility of the Sport SVR. The first impression is that of a car that completely belies its size, height and weight, be it in the way it performs or handles 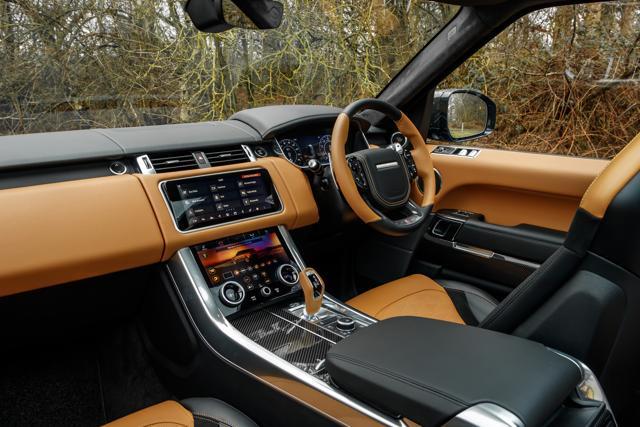 The drive starts off on narrow, undulating and patchy British B-roads in the Cotswolds - the kind that can give any chassis a nice workout - and the SVR was ready to play. The brilliantly weighted and precise steering coupled with the nicely balanced chassis instantly gives you the confidence to flick the SVR through corners at serious speeds. Sitting high off the ground and with fantastic visibility all round, the ease with which you can accurately place this behemoth on a twisty road lets you build up a nice rhythm and flow. The SVR's handling is a real treat. The ride over undulations is remarkably flat and composed but this comes at the price of a slightly firm ride, which isn't harsh but noticeable over sharp edges. I suspect that in India, riding on those low-pro tyres, the odd pothole could thwack through, which is why the India-spec SVR is likely to get the 21-inch wheels with taller, higher profile tyres.

Planting the biggest smile on your face is the supercharged V8. Your acquaintance with this brutish motor starts with the deep burble at low revs, which turns into a delicious higher-pitched roar as you rev it hard. Keep the exhaust baffles open (via a button on the centre console) and you are treated to a lovely staccato of pops and crackles on the overrun, which makes lifting off as much fun as flooring it. Well almost. Because, when you crack the throttle wide open, acceleration is just ludicrous. The big SVR pulls relentlessly with no let-up, which makes Land Rover's 280kph top speed claim entirely believable. On the long straight at Jaguar's Fen End proving ground, the speedo needle would swoop past 200kph quite effortlessly. It's not just the muscular top end of this engine, but the instant response and wide torque spread it delivers that gives the SVR devastating real-world pace. It's also genuinely hard to drive the SVR slowly because the quick-shifting, ZF eight-speed gearbox (the best torque converter-driven automatic transmission in the world) and the instant punch at any point in the powerband, yanks you, without you realising, to seriously illegal speeds. 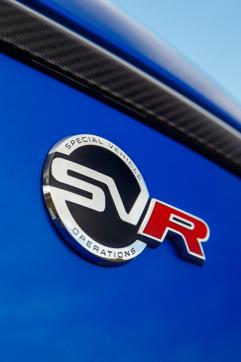 The Fen End proving ground, which was once an RAF base, has a good mix of fast corners, straights and a banked curve, which makes it an ideal place to explore the limits of the SVR. Pushing hard through the corners, you do notice the SVR's high centre of gravity, especially when you pitch the 1802mm tall SUV into a corner, but it's never disconcerting; in fact, it feels remarkably buttoned-down. Those massive 295/40R22 tyres offer humongous grip and coupled with a stiff chassis, superb steering and active anti-rolls, the SVR never feels a handful; just imagine how much more planted it would feel if sat lower to the ground. But this is a Range Rover, which means crucial parameters like water-wading depth and ground clearance can never be compromised to maintain the brands off-road DNA.

And to prove just how good it is off-road, Range Rover set up a small course, which the rain turned into a slushy track. I'm always impressed by what Range Rovers can do off-road, and the SVR is no exception. In fact, given its sporty setup and road-biased tyres, I was amazed by the nonchalant way in which it scrabbled up down the slippery, muddy course, the Terrain Response system orchestrating the four-wheel-drive system to deliver maximum traction.

The laws of physics may not endow the SVR with the same agility or responsiveness of a Cayenne, but this hottest of Range Rovers is not about being the fastest point A-to-B car. It's the SVR's incredible versatility that makes it a special vehicle. It's happy to eat supercars for breakfast or play with mountain goats on a muddy slope, and it also feels comfortable being a daily driver for the home to office run. Likely to be priced at ₹2 crore (estimated, ex-showroom), the SVR will be pricey, but no other sports-SUV has the wide range of talent it offers.