Finance Minister Sitharaman said that the millennials would rather use radio taxi services rather than committing to buying a car.
By : Hindustan Times, New Delhi
| Updated on: 11 Sep 2019, 12:10 AM 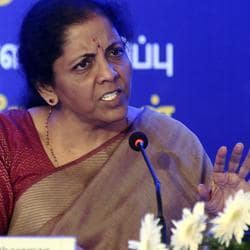 Finance Minister Nirmala Sitharaman speaks during a press conference on Furthering India's Development 100 Days of Bold Initiatives Decisive Actions of the Government of India, in Chennai on Tuesday.

Finance minister Nirmala Sitharaman on Tuesday said the government will soon respond to the demands of the automobile sector, which is facing the worst slump in more than two decades.

"We are working on a few things. We are conscious that we need to respond," Sitharaman said, adding that the goods and services (GST) Council will decide on cutting goods and services tax on automobiles, which attract a 28% rate now, at its September 20 meeting in Goa.

Carmakers have sought an immediate cut in GST on vehicles to revive sales during the crucial festive season, after auto sales declined for the 10th straight month. They are hoping that a cut in tax would help attract buyers.

Sitharaman was addressing reporters in Chennai to mark the National Democratic Alliance (NDA) government's first 100 days in office in its second consecutive term.

It has been a challenging start for the government, with India's economy expanding at the slowest pace in six years in the June quarter, amid sluggish demand, slowing private investment, a slump in the automobile sector and rising job losses.

The passenger vehicle industry suffered its worst-ever monthly sales performance in August. Sales of domestic passenger vehicles plunged 31.6% to 196,524 units from a year earlier, according to data from the Society of Indian Automobile Manufacturers (Siam).

"A tax cut on automobiles can boost demand in the short term, especially with the festive season round the corner," said Rajeev Singh, partner at Deloitte India.

"As far as commercial vehicles are concerned, GST rate cut would not be enough to revive demand. The government may have to increase infrastructure expenditure. It should also seriously consider a vehicle scrappage policy as it will create sustained demand."

Sitharaman said the automobile sector has been affected by several issues, including the move to Bharat Stage-VI emission norms from 2020. However, a change in "mindset" among consumers has also impacted demand for cars.

"Some studies do tell us that mindset of millennials, who are now preferring not to commit an EMI (equated monthly installment) for buying an automobile, instead prefer to take Ola, Uber, everything else, or take the metro. Whole lot of factors are influencing automobile sector. We are trying to solve the problem for them," she added.

In an effort to arrest the slowdown in the economy, Sitharaman met representatives of several industries in July to understand the challenges faced by them.

The finance minister assured buyers and manufacturers that vehicles compliant with BS-IV emission norms registered before March 31, 2020 would be allowed to run for the entire registration period.