Carmaker PSA posted net income of 595 million euros ($698 million) during the first half of the year even as lockdowns hammered vehicle sales in some of its biggest markets.
By : Bloomberg
| Updated on: 28 Jul 2020, 13:09 PM 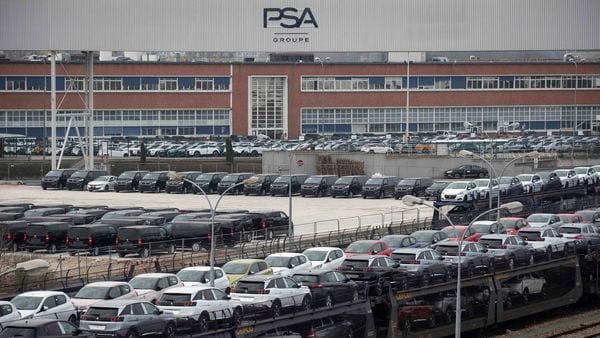 File photo: Cars are parked in a lot in front of a plant of French automaker PSA Peugeot-Citroen, at Poissy, on the outskirts of Paris.

PSA Group held on to its financial outlook after generating a profit during the first half of the year, suggesting the French automaker has weathered the coronavirus pandemic better than feared.

The company posted net income of 595 million euros ($698 million) even as lockdowns hammered vehicle sales in some of its biggest markets.

“Our order book is stellar," Chief Executive Officer Carlos Tavares said Tuesday in an interview with Bloomberg TV. “We expect to be able to invoice a significant number of cars in the second half."

The maker of Peugeot, Citroen, Vauxhall and Opel vehicles is among the most vulnerable to a downturn in its largest market Europe, where the health crisis has dragged down economies from France to Britain and Italy. While car sales in the region have been slowly recovering from a record plunge in April, they’re still expected to fall by a fifth this year, according to a forecast by Bloomberg Intelligence.

Tavares is also working to gain European Union antitrust approval to merge with Italian-American peer Fiat Chrysler Automobiles NV, and on Tuesday rejected a revision to the deal’s terms for now, saying that the current focus should be on recovering from the Covid-19 crisis.

“By the end of this year, after the rebound, we’ll see what will be the potential cash position," of the combined company, he said.

PSA said first-half operating income was 517 million euros. Analysts had expected 222 million euros, according to data compiled by Bloomberg. PSA reiterated its outlook for an average automotive adjusted operating margin of more than 4.5% for 2019 to 2021. It came in at 3.7% in the first half.

The French manufacturer expects the European auto market to shrink by a quarter this year, with contractions of 10% in China as well as 30% in Latin America and Russia. PSA has ramped up its European factories after closing them in mid-March.