This is the most consecutive hikes on petrol and diesel prices India has seen in recent times. Earlier, there was a five-day spree of hikes two weeks ago.
By : HT Auto Desk
| Updated on: 01 Nov 2021, 08:24 AM 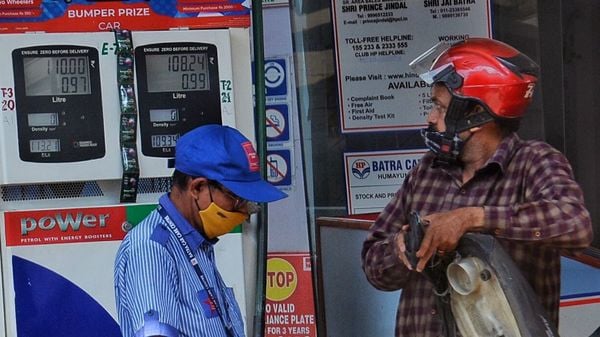 A petrol pump staff refills fuel in a vehicle during the continuous hike in fuel prices. in New Delhi.

Petrol and diesel prices today have been hiked once again by oil companies. This is the straight sixth day of hike that began on Wednesday last week. The fresh hike has taken the price of petrol past ₹110 mark in Kolkata, the latest major metro city to join the list. Mumbai too has seen petrol price go past ₹115 per litre.

Petrol price today in Delhi has reached ₹109.34 a litre in Delhi after the price of the fuel as increased by 35 paise for a litre. Diesel price too is nearing the ₹100 mark in Delhi as it has hit ₹98.07 a litre today.

Petrol price in Mumbai today will cost ₹115.15 per litre while price of a litre of diesel will now cost ₹106.23.

Petrol price in Bengaluru has been increased to ₹113.15 per litre. Diesel price today has also been hiked to ₹104.09. In Hyderabad, a litre of petrol is now available at ₹113.72 while diesel will set you back by ₹106.98 for one litre in the capital of Telangana.

The border town of Sri Ganganagar in Rajasthan remains the costliest place in India to buy a litre of these fuels. Petrol price here has now reached an unprecedented level of ₹121.62 a litre, while diesel costs ₹112.52 per litre, even higher than petrol rates in some of the major cities.

The rising price of global crude oil, which has reached $85 per barrel, has been one of the key reasons behind frequent revision in petrol and diesel prices. The hike in global crude oil price has prompted the Centre to take up the matter with oil exporting countries like Saudi Arabia and Russia. However, there has not been any outcome of these talks yet which has helped to rationalise the price to keep the rates in the domestic market down.