Diesel prices have crossed the century mark in Chennai and is slightly away from the mark in Kolkata.
By : HT Auto Desk
| Updated on: 27 Oct 2021, 12:21 PM 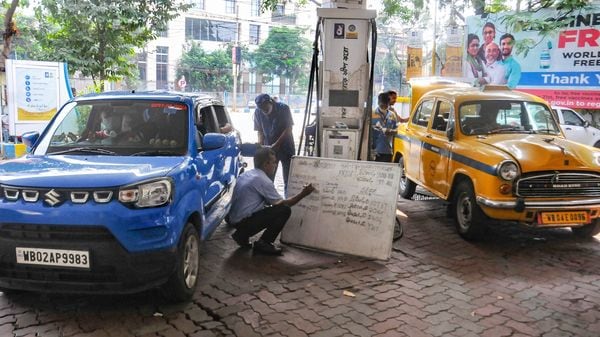 After petrol, diesel too is set to cross ₹100 a litre mark in Kolkata.

The fresh hike in petrol and diesel prices come following the surge in crude oil prices in the international market.

Petrol price in Delhi is now ₹107.94 a litre, while diesel in the national capital is selling at ₹96.67 per litre. A litre of petrol and diesel in Mumbai are selling at ₹113.80 and ₹104.75 respectively. Mumbai became the first metro city of India to start selling petrol at ₹100 per litre on May 29 and now, diesel price too has crossed the century mark in the country's financial capital.

Chennai too is selling both petrol and diesel at above ₹100 a litre rate. Petrol in the city is selling at ₹104.83 a litre, while a litre of diesel costs ₹100.92 in the city. In Kolkata, the petrol price on October 27 is ₹108.46 per litre, while per litre diesel price is slightly away from the century mark at ₹99.78.

Both petrol and diesel prices have been increasing incessantly for the las6t few months. This is not only hammering the motorists but non-motorists too are heavily impacted by a surge in consumer goods prices.

There have been demands to bring petrol and diesel prices under GST ambit. However, several state governments opposed the proposal fearing lose of revenue from motor fuels. The massive hike in excise duty is impacting the petrol and diesel costs in India mostly. Despite demands for reduction of excise duty, the central government has denied taking any such move.