Parking facilities discontinued at half of Noida Metro stations: NMRC 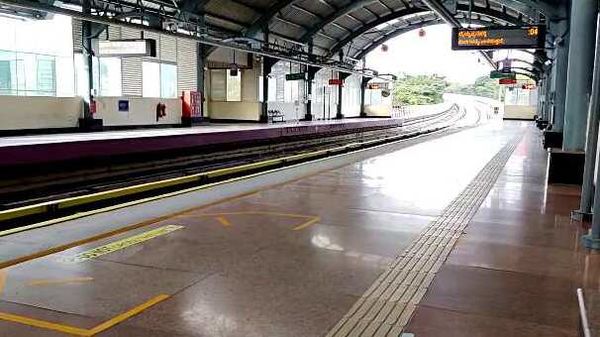 File photo of a metro station used for representational purpose

Parking facilities at five of the 10 metro stations of the Aqua Line have been discontinued due to "very less" earning from them, the Noida Metro Rail Corporation (NMRC) announced on Wednesday.

"The earnings from these stations were very less and NMRC had also deployed additional contractual staff at these stations to manage the parking lots," she said in a statement.

"The decision to discontinue parking facility at these stations has been taken by the NMRC as a measure to optimise operational cost and curtail additional expenditure," she added.

The parking fees for cars at these stations is ₹20 for first six hours, ₹10 for any additional hour and maximum ₹40, while monthly charge is ₹800, according to the NMRC.

For two-wheelers, the fees are ₹10 for first six hours, ₹5 for any additional hour and maximum ₹20, while monthly charge is ₹400, it added.

In December 2020, the NMRC had also suspended its city bus service following a meeting of its Board on December 24, according to officials.

"There were 50 buses that were running before the (Covid-19) lockdown. The services were suspended owing to the lockdown in March and not resumed thereafter," an official told PTI.

The Aqua Line, which connects the twin cities of Noida and Greater Noida over a 29.7-km distance via 21 stations, had resumed service in September post the lockdown in adherence of the Covid-19 protocols.

Its average daily ridership however dropped from 22,758 in March 2020 to 7,915 in December. The metro network on January 4 recorded its highest single-day ridership of 10,418 since resuming service after the lockdown, according to officials.