The noise radar works like a speed camera by measuring a vehicle's noise emissions and then taking a picture of the license plate if a certain threshold is exceeded.
By : HT Auto Desk
| Updated on: 15 Feb 2022, 11:28 AM 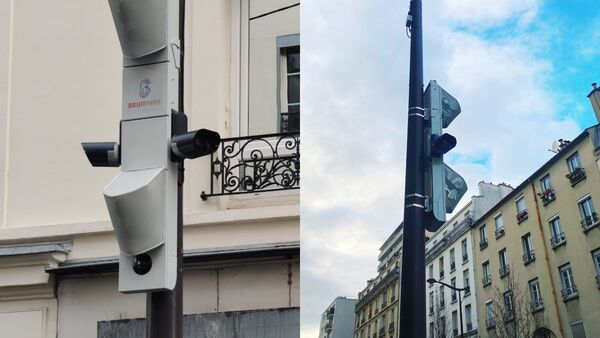 The noise radar has been installed high on a street lamp post in the 20th district in eastern Paris.

In an effort to reduce noise pollution and quieten its streets, France's capital city Paris has installed and inaugurated its first noise radar. The device will be able to measure the noise level of moving vehicles and identify their licence plates, helping the authorities fine loud motorcycles and other vehicles.

The noise radar has been installed high on a street lamp post in the 20th district in eastern Paris, which is one of Europe's noisiest cities. This sound radar will automatically issue fines for vehicles that make lots of noise. "Too much noise makes people sick. (The radar is important ) for our health and quality of life," Paris' Deputy Mayor David Belliard said in a tweet.

Elaborating on how the noise radar works, another Deputy Mayor of the city, Dan Lert, explained in a tweet that the device works like a speed camera by measuring a vehicle's noise emissions and then taking a picture of the license plate if a certain threshold is exceeded, for automatic verbalization.

He added that a runaway motorcycle in the middle of the night can wake up to 10,000 people in the city. “Road noise is the primary source of noise pollution in Paris. It weighs on the health of Parisians who pay a high price for it, with 8 months less life expectancy in good health," Lert wrote.

The device will be used on a pilot basis for the next few months, and authorities will test whether it can unequivocally identify licence plates of loud vehicles, after which the equipment will have to be officially approved by end 2022. Till then, no fines will be issued but the city plans to start fining people from early 2023.

Meanwhile, the government plans to deploy more noise radars in other French cities and test out procedures for automating the fines as part of a 2019 mobility law. Under existing legislation, authorities can already fine owners of noisy vehicles but the police need to have the necessary equipment and catch the driver in the act.