The app has been developed by NHAI to monitor location, growth, species details and more for each and every plant under all plantation projects along the national highways.
By : PTI
| Updated on: 22 Aug 2020, 10:13 AM 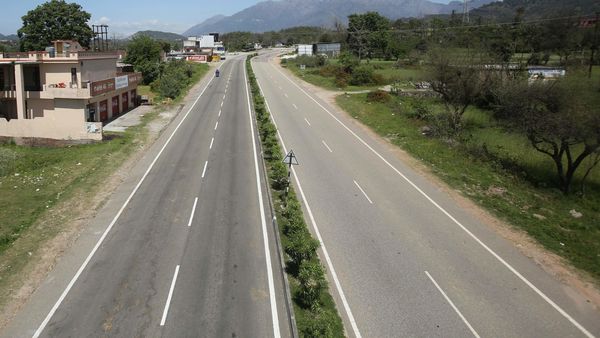 File photo of the Jammu and Kashmir highway.

Union minister Nitin Gadkari on Friday stressed the need for utilising modern and green technologies in highways construction besides reducing the cost of road building by at least 25 per cent.

The road transport minister also launched a mobile app 'Harit Path' to monitor the plantation along the national highways.

Chairing a meeting via video conference to review 'New Green Highways Policy (Plantation)' and discuss use of new technologies in road construction, Gadkari said it should be the ministry's mission to reduce cost of construction by 25 per cent and for this new technologies are required, the Ministry of Road Transport and Highways said in a statement.

Gadkari, who also holds MSME portfolio, also stressed on utilising modern and green technologies in road construction all over the country.

"The minister launched 'Harit Path', a mobile app to monitor the plantations through geo-tagging and web-based GIS enabled monitoring tools. The app has been developed by NHAI to monitor location, growth, species details, maintenance activities, targets and achievements of each of its field units for each and every plant under all plantation projects," the statement said.

While inaugurating the mobile app, the minister emphasised on strict monitoring of plantation and transplantation of trees.

The minister suggested that specialised persons/agencies should be hired for plantation of trees along the highways.

He suggested involving NGOs, self-help groups and horticulture and forest department in this.

The officials assured that they will be able to achieve the goal of 100 per cent plantation on highways by March 2022.

"While discussing the issue of transplantation of trees, Gadkari said that it should be our mission to save all the trees from being cut and specialised agencies equipped with new technologies should be hired for the purpose. The minister stressed upon using local indigenous material like jute, coir, etc for strengthening purposes," the statement said.

The minister appreciated the use of such technology in road construction in Andaman and Nicobar and motivated the National Highways and Infrastructure Development Corporation Ltd to follow the example in rest of the projects.

Meanwhile, the the National Highways Authority of India (NHAI) in a statement said the mobile app 'Harit Path' launched by the minister will provide digital address to every tree planted along the national highways.

The GPS-based app has been developed by the NHAI to monitor location, growth, species details, maintenance activities, targets and achievements of each of its field units for each and every plant under all plantation projects, it said.

"To commemorate 25 years of its service to the nation, the National Highways Authority of India has also recently undertaken 'Harit Bharat Sankalp', a nation-wide plantation drive which is in line with NHAI’s commitment to promote environment protection and sustainability," the statement said.

Under this initiative, the NHAI planted over 25 lakh plants in 25 days along the stretches of the national highways between July 21 and August 15, 2020. The drive takes the total cumulative number of plantations done during the current year to 35.22 lakh.

"The nation-wide plantation drive has been actively taken up by NHAI’s regional offices to achieve the collective target of making greener national highways. Maximum number of over 5.0 lakh plants have been planted in Uttar Pradesh, followed by over 3.0 lakh in Rajasthan and 2.67 Lakh in Madhya Pradesh along the national highways," the statement said.

In order to ensure 100 per cent survival of the plants, avenue plantation of minimum height of 1.5 metre has been emphasised along the national highways.