Nissan is struggling to restore profitability and sales after the November 2018 arrest of its former Chairman Carlos Ghosn and because a lack of new models left it ill-prepared to face a downturn in global vehicle demand amid the coronavirus pandemic.
By : Bloomberg
| Updated on: 26 Jul 2020, 09:29 AM 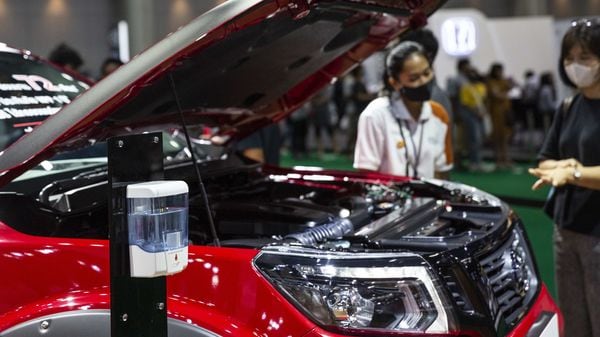 A hand sanitizer dispenser sits next to a vehicle on display at the the Nissan Motor Co. booth at the Bangkok International Motor Show in Bangkok, Thailand,

Nissan Motor Co. is set to report a smaller-than-projected operating loss for the latest quarter, as the automaker reduces costs ahead of schedule, a person familiar with the matter said.

Although analysts are predicting a quarterly operating loss of 253 billion yen ($2.4 billion), the accelerated cost cuts helped to shrink that by about 100 billion yen, said the person, who asked not to be identified because the information isn’t public. The manufacturer will report results for the fiscal period ending June on Tuesday, July 28.

The Japanese carmaker is struggling to restore profitability and sales after the November 2018 arrest of its former Chairman Carlos Ghosn and because a lack of new models left it ill-prepared to face a downturn in global vehicle demand amid the coronavirus pandemic. After announcing its biggest loss in 20 years for the business year that ended March, Nissan unveiled plans to cut 300 billion yen in fixed costs, close production lines and slash capacity by 20%.

(Also read: Will Magnite launch in India provide Nissan with a lifeline?)

The annual fixed-cost reduction target will be raised to 350 billion yen and three more global factory lines will be shut down, according to documents seen by Bloomberg News. That will increase total worker cuts to about 14,000 over the next few years, compared with the 12,500 job cuts announced a year ago, the documents show. Two rented offices near Nissan’s headquarters in Yokohama are being closed as well, as more people work from home during the Covid-19 outbreak, the person said.

A representative for Nissan didn’t immediately respond to a request for comment during the weekend.

As part of its efforts to generate cash, Nissan is pushing forward with plans to sell assets, the documents showed. Nissan has been struggling to find a buyer for subsidiary Nissan Trading, Bloomberg News reported in February.

Earlier this month, the automaker raised 70 billion yen in debt by issuing notes ranging from 18 months to five years, paying interest that was the highest among all debt issued by Japanese firms this fiscal year, according to data compiled by Bloomberg.

The efforts to reduce spending and increase cash will put Nissan on track to return to positive cash flow for the automotive business during the January-March fiscal fourth quarter, the person said.

Like many other automakers, Nissan’s revenue plummeted during the April-June period this year, by about a half, the documents showed. Although the manufacturer announced two new compact SUV models this year, the Rogue and the electric Ariya, they aren’t on sale yet. Nissan is considering moving more of its sales online, after learning that about 10% of its vehicles were sold digitally during the pandemic lockdown, the person said.

Nissan is also selling off all of its corporate jets, with four out of five aircraft already sold, the person said. One of them is the Gulfstream G650 with the tail number N155AN that was used by Ghosn.