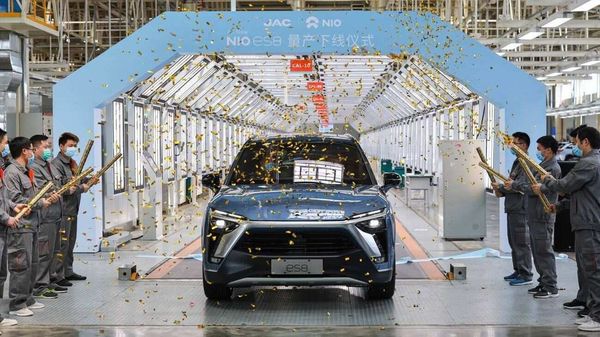 Electric-vehicle maker Nio Inc. is partnering with the local government of Hefei in China’s central Anhui province to set up a new energy vehicle industrial park, adding momentum to the city’s ambition of becoming a hub for EV production.

The size of the investment by authorities wasn’t disclosed, although Nio did say the Hefei government and its associated parties plan to re-invest their returns from the equity investments in Nio to “support the further cooperation in Hefei."

Nio is already aligned closely with that part of China, having secured $1 billion of cash injections from entities led by the Hefei government last April, alleviating concerns the startup was running out of cash. Nio’s New York-listed shares finished the year up 1,112%.

Long a base for conventional carmaking, Hefei has been actively promoting its EV credentials in recent years, participating in the latest fundraising round of EV maker Zhejiang Zero Run Technology Co., or Leap Motor as it is more commonly known. Volkswagen AG also recently raised its stake in its China joint venture with Anhui Jianghuai Automobile Group Corp. and plans to develop a series of EVs in the area.

Nio has rolled out three EV models from its Hefei-based production line since 2018. It also opened the headquarters of its subsidiary, Nio China, in Hefei, in October.