Swedish electric truck startup Volta raised $20 million via convertible-debt funding round, led by Luxor.
By : Bloomberg
| Updated on: 27 Jan 2021, 09:32 AM 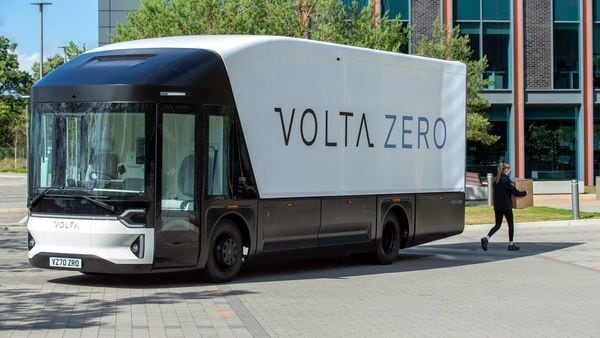 File photo of a Volta Truck

Volta raised $20 million via a convertible-debt funding round led by New York-based Luxor, which has previously invested in startups including Lordstown Motors Corp. and Hyliion Holdings Corp., the Swedish company said in a statement.

Volta will work on a plan to raise further funds this year, Chief Executive Officer Rob Fowler said in an interview. “Nothing is off the table and we’re assessing all different routes for business, both private and public," he said.

The company last year unveiled the Zero, a 16-ton battery-powered truck designed to haul goods as far as 125 miles on a single charge. Volta plans to start large-scale manufacturing by the end of 2022 after receiving more than 1,200 orders, the CEO said.

Electric big rigs are seeing increasing interest from investors. Nikola went public last year after merging with a specialty purpose acquisition company, with Hyliion and several other clean-transportation startups following suit. Incumbents including Daimler AG and Volvo AB are planning to roll out several battery-powered models in the coming years.

Volta expects to “far exceed" its previous target to manufacture 5,000 trucks by 2025, as a rising number of cities impose curbs on diesel vehicles to reduce inner-city pollution, the company said. While Volta had aimed to sell its trucks mainly in Europe, the company now plans to expand into North America and Asia, Fowler said.

Before Luxor, Volta had been backed mostly by Scandinavian investors. The company employs more than 80 people and plans to continue adding staff in engineering and manufacturing.