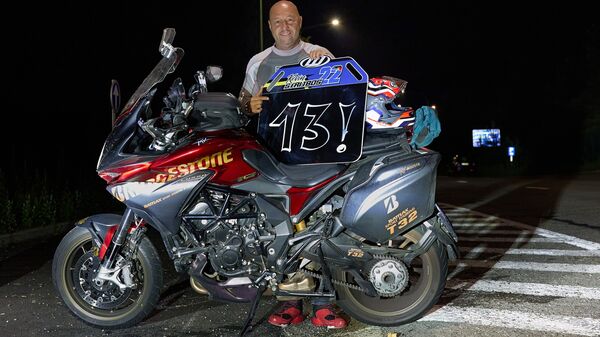 During the world record attempt, Thierry Sarasyn started from the Czech Republic at at 4.16 am and arrived in Arlon, Belgium, at 11.59pm

Bike enthusiast and Belgian rider Thierry Sarasyn broke the world touring record by using Bridgestone’s Battlax Sport Touring T32 tyres, on June 20. The biker passed through 13 countries in 19 hours and 43 minutes, beating the previous touring record of passing through 11 countries. The Bridgestone tyres facilitated this achievement by increasing the wear life as well as providing an improved grip and wet performance.

During the world record attempt, Sarasyn started from the Czech Republic at at 4.16 am and arrived in Arlon, Belgium, at 11.59pm. At that time, he still had four hours left to get to Holland in order to break the previous record. “But the goal was not to set a record that can never be beaten, just to beat the existing record," Sarasyn added. He then thought it would be logical to add the 13th country to the list.

Though he could attempt travelling to the 14th country but he did not citing safety concerns. “I felt I was getting tired. And being tired while riding in the dark is not safe. We put safety first during this travel," Sarasyn said. He elaborated that he made sure he took breaks every two hours and followed strict nutritional rules to keep his focus on the world record attempt intact.

The biker's world record tour was recorded using an official tracking system. Talking about the challenges he faced during the journey, he said, he faced physical and mental fatigue, backpain, traffic problems, navigation failure and excessive heat. The temperature remained above 35ºC, and peaked at 39ºC in Austria and Liechtenstein from 11 am onwards. “I drank a lot and I think it was one of the major elements in making this adventure successful," he said.

The Battlax sport touring T32 tyres are touted to be the products of technical expertise and technological applications that enhances the tyre’s connection with the road. “I knew there would be highways but also mountain roads. So I needed a versatile tyre. And I always loved the way the T32 front tyre handles and the feedback it gives," Sarasyn said.