US-based electric carmaker Tesla's surging shares, along with its CEO Elon Musk's wealth which has swollen three times over that of Mukesh Ambani, earned praised from the Mahindra Group's chairman.
By : HT Auto Desk
| Updated on: 03 Nov 2021, 05:49 PM 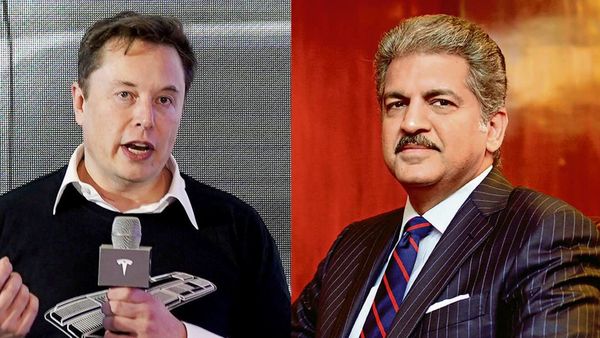 Anand Mahindra, Chairman of Mahindra Group, shared a three-year old tweet to underline how Tesla CEO Elon Musk managed to grow his EV business into an empire bigger than anyone else.

Anand Mahindra, Chairman of the Mahindra Group, spoke highly of Tesla's dominance in the EV world and its CEO Elon Musk's perseverance as examples which offer key life lesson ‘never give up’. Taking to Twitter, Mahindra walked down memory lane to share his words of encouragement for an 'exhausted' young CEO of a company which is now the world's largest electric carmaker.

Anand Mahindra said he found it ‘hard to believe' that he needed to share the morale booster to a person who is currently the richest businessman in the world. This week, the Tesla CEO's net worth crossed $300 billion for the first time, becoming three times richer than Warren Buffet or Mukesh Ambani.

World's biggest electric carmaker Tesla has seen its shares hit the roof in recent times, which has also helped its CEO Elon Musk's wealth surge to all-time high. Earlier last week, Tesla's market capitalisation has gone past $1 trillion mark and has become the first ever car manufacturer to join the elite club which has brands like Apple, Amazon or Microsoft.

Three years ago, when Elon Musk seemed ‘under pressure’ when he openly talked about how his ‘efforts to run Tesla have taken a toll on his personal life’, Anand Mahindra has sent him a note to cheer him up. It read, “Hang in there Elon Musk. Your factory is now humming at a brisk clip. The world needs inspirational innovators like you."

Three years later, Anand Mahindra says that Elon Musk's emergence during this phase and the performance of Tesla as world's biggest electric carmaker has one of the biggest lesson of life written all over it: Never Give Up.

Mahindra wrote, “Hard to believe I felt the need to send Elon Musk a morale-boosting message just 3 years ago, when he was exhausted & suspected worse was to come. Now worth over $300bn; wealthier & more successful than any businessperson ever. The lesson? Never give up. Believe in your own story."

Tesla is expected to launch its much sought-after electric cars in India soon as it is busy preparing grounds for the EVs to hit the roads here. The blockades, which include higher taxes, are being discussed with the Centre before Tesla eventually decides to enter the EV business in this country too.