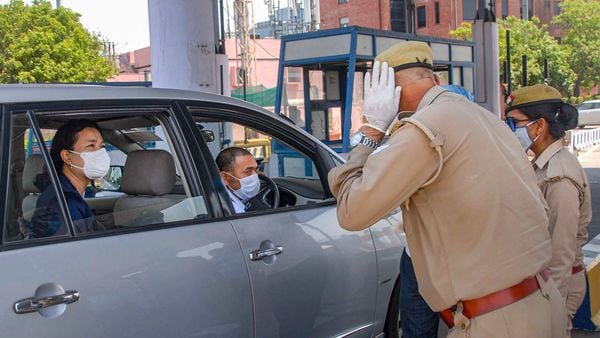 Noida: Police personnel check a commuter travelling from Delhi to Noida during the nationwide lockdown to curb the spread of coronavirus.

Nearly 2,300 vehicles, including auto-rickshaws, were penalised and 115 impounded across Noida and Greater Noida for allegedly defying lockdown curbs on Wednesday, police said.

The Gautam Buddh Nagar police stepped up vigilance on road traffic violations as new guidelines which permit some ease in movement kicked in during the fourth phase of the coronavirus-induced lockdown.

According to police data, 5,353 vehicles -- 1,788 four-wheelers, 3,392 two-wheelers and 173 three-wheelers -- were checked across 120 barrier points in the western Uttar Pradesh district adjoining Delhi.

As many as 115 vehicles, including 85 two-wheelers, 24 three-wheelers and six four-wheelers were impounded, the police said.

Also FIRs were registered in eight cases against erring vehicles, it said.

A total fine of ₹36,200 was recovered from the erring vehicles, it added.

The Gautam Buddh Nagar administration on May 19 issued new guidelines for the lockdown which, among others, allow movement of two people on a two-wheeler given one of them is a female and both are wearing helmets.

On a three-wheeler, two people besides a driver will be allowed and all of them have to cover their faces with masks, according to the guidelines.