Mitsubishi Motors’ global sales for the first half of the fiscal year fell 41% from a year earlier to 350,563 units, due to the Covid-induced slump in demand and reduced output. Domestic sales in the same period slipped 48% from a year earlier.
By : Bloomberg
| Updated on: 04 Nov 2020, 03:41 PM 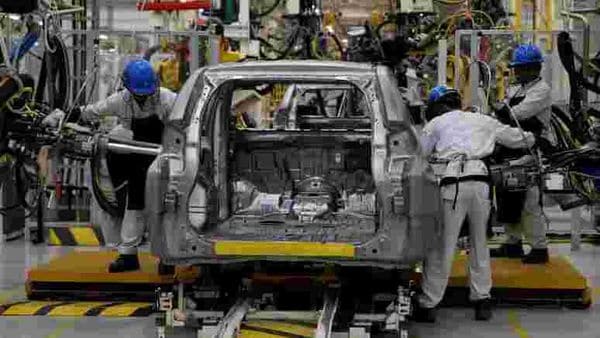 File photo of workers assembling a Mitsubishi Pajero at a Mitsubishi car factory used for representational purpose only.

Mitsubishi Motors Corp. reported an operating loss that was wider than estimates as the Japanese automaker struggles to sell cars amid the coronavirus outbreak.

The loss for the quarter ended September was 29 billion yen ($276.5 million), compared with analysts’ average projection for a loss of 27 billion yen. Even so, Mitsubishi Motors stuck to its operating loss outlook of 140 billion yen on sales of 1.48 trillion yen for the full fiscal year through March.

Mitsubishi Motors’ struggles are putting a strain on its alliance with Nissan Motor Co. and Renault SA, which has been in turmoil since the November 2018 arrest of former Chairman Carlos Ghosn. Mitsubishi Motors unveiled a restructuring plan earlier this year, pledging to cut fixed costs by 20% and focus on Southeast Asia, one of its strongest markets. It also ended the production of its iconic Pajero SUV for the domestic market.

(Also read | Mitsubishi Motors to cut up to 600 jobs to reduce costs: Sources)

“Southeast Asia, in which Mitsubishi Motors has a presence, has been impacted by the coronavirus," said Bloomberg Intelligence analyst Tatsuo Yoshida. “If they don’t ride out the crisis now, there won’t be a future for them."

Shares of Mitsubishi Motors rose 2.5% before the results. The stock is down about 55% this year. Sales for the July-September quarter fell 42% to 345 billion yen, compared with analysts’ average estimate for 362 billion yen.

Meanwhile, as the auto industry faces a once-in-a-generation shift to electric vehicles, the company said on Monday it plans to boost the ratio of electric cars in total sales to 50% by 2030.

The Nissan-Renault-Mitsubishi alliance announced in May that they will strengthen cooperation in developing and building vehicles by dividing up their areas of focus. Mitsubishi said it will focus on plug-in hybrids.

Analysts are projecting, on average, for Mitsubishi Motors to report an operating loss of about 110 billion yen on sales of 1.5 trillion yen for the full year.