A mexico plant had claimed that it was authorized to remain open to supply headquarters and help GM build respirators.However, GM has said it never had a purchase agreement to buy respirator parts from the plant.
By : Bloomberg
| Updated on: 09 May 2020, 10:58 AM 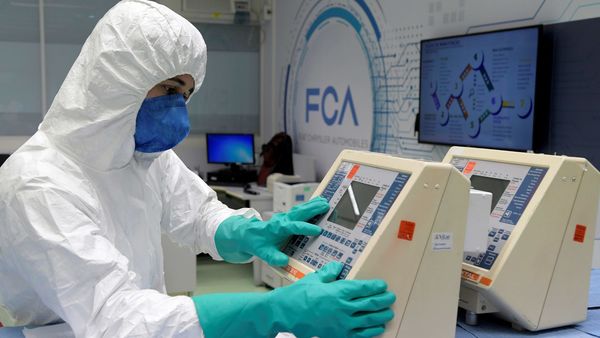 The federal Labor Ministry shut the Mexico plant after finding “no evidence” that the unit was making respirator parts, (File photo used for representational purpose only).

A U.S. manufacturer with a plant in Mexico that claimed the coveted “essential" status to keep operating was shut in a government sweep aimed at stopping factories from abusing the privilege, according to the Labor Ministry.

The facility, which is located in the central Mexican city of Santiago de Queretaro and is owned by Industrial Automation, said in an April 5 document that it was authorized to remain open to supply headquarters and help build respirators. A week earlier, it had given about 100 employees the option to keep working if activities were deemed essential, saying it had a project with General Motors Co., which is building the breathing machines.

But GM said it never had a purchase agreement to buy respirators parts from the Industrial Automoation fact, and three workers told Bloomberg News that the plant continued to produce regular components for the auto industry. Mexican guidelines deem medical equipment essential -- but not car parts.

On May 4, the federal Labor Ministry shut the plant after finding “no evidence" that the unit was making respirator parts, according to a statement from the agency. The ministry said in a separate e-mailed statement that thousands of audits recently have focused on “inspecting work places with essential activities to verify that they’re carrying out security and health measures."

The audit of the Industrial Automation factory involved an hours-long sweep, after which agency inspectors told plant employees to go home, said one of the workers. The employees interviewed for this article, who asked not to be identified for fear of reprisal, said they never complained to the authorities, and one said he did see some respirator parts being made at one point.

Privately owned Industrial Automation didn’t respond to multiple requests for comment to both its local unit and headquarters in Rochester Hills, Michigan. While GM said it has no purchase order with the company for respirator parts, both the U.S. carmaker and Bloomberg News couldn’t independently verify whether Industrial Automation was supplying a third party with components. GM was ordered by President Donald Trump in March to start building breathing machines for Covid-19 patients.

The closure underscores the difficulties that intertwined global supply chains will face as some nations look to reopen their economies just as others start to feel the brunt of the pandemic. Mexico is still ramping up efforts to contain the virus and get a handle on the spread of infections. The official tally pegs infections at less than 30,000, with about 2,960 deaths, although the rate of testing is among the lowest in the Americas.

The problem for businesses on both sides of the border is that the U.S. and Mexico don’t agree on how to define an “essential" business or service. The U.S. federal government has deemed essential “workers critical to the manufacturing, distribution, sales, rental, leasing, repair and maintenance of vehicles and other transportation equipment." The squeeze is giving U.S. companies a stark reminder of their reliance on Mexican inputs and suppliers.

“The auto producers are feeling pressure to get the plants back up and running for the U.S. economic reopening," said Duncan Wood, director of the Wilson Center’s Mexico Institute in Washington. “The sentiment is that if Mexican plants don’t reopen then U.S. companies will look elsewhere for parts."

While no Covid-19 cases have been reported at Industrial Automation’s plant, Alcalde said last week that areas of the country where non-essential plants have remained open have seen more infections of the deadly virus.

In the March 30 notices, Industrial Automation gave workers options for the different phases of the health emergency. In Phase 2, employees could stay home for 30 days with no pay or come to work and follow certain sanitary guidelines. In Phase 3, they could stay home and earn the minimum wage -- the equivalent of about $5 a day in Mexico -- or keep working to build respirator supplies for full pay if the company were deemed essential.

Most chose to return. To get to and from work, employees carried the April 5 letter stating that IA Mexico, as the division is known, is “critical for the country’s response to the pandemic."

“The person who holds this letter and their identification as an employee of IA Mexico requires the freedom to travel from their home to their work center or to other sites as necessary," including across state lines, according to the letter which was signed by a general director.

Bloomberg reviewed copies of both the March 30 notice and the April 5 letter.

By the last week of April, the plant was pretty much back to normal production, according to two of the workers. It’s unclear how long the plant will stay closed.