About 73 million personal vehicles crossed from Mexico into the United States last year, according to data from the Bureau of Transportation Statistics, an average of 200,000 cars every day.
By :
| Updated on: 20 Aug 2020, 11:15 AM 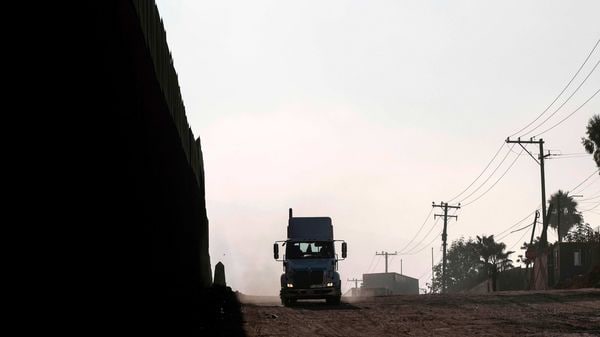 A truck rides along the Mexico-US border fence before lining up to cross to the US at the Otay commercial port of entry in Tijuana, Baja California state, Mexico.

Mexican officials and border town residents criticized US President Donald Trump on Wednesday for threatening to levy a tax on cars crossing into the United States to fund his signature border wall.

The mayor of Ciudad Juarez, Armando Cabada, slammed Trump's proposed car tax as a political stunt aimed at garnering support ahead of the US election in November.

"It was an issue that gave him votes in the last election, and now he's using it again, in a desperate manner, to try to secure these same votes," said Cabada, whose city lies across from the Texas city of El Paso.

About 73 million personal vehicles crossed from Mexico into the United States last year, according to data from the Bureau of Transportation Statistics, an average of 200,000 cars every day.

Trump made the suggestion during a speech in Yuma, Arizona, on Tuesday, in which he vowed Mexico is "100 percent" paying for the wall.

"They going to pay at the border...cars going through. We're going to do a toll," he said.

Cuidad Juarez resident Hector Escobado accused Trump of misrepresenting the plan, saying that instead of forcing Mexico to pay, the toll would tax US citizens like himself.

(Also read: Donald Trump highlights 'soaring demand' for used cars in the US)

"Many of us are US citizens who live here in Mexico and cross back and forth almost every day. He would be charging us," he said.

The thousands of Mexicans and dual citizens who cross into the United States daily include essential workers who help keep US hospitals running amid the pandemic.

During his speech Tuesday, Trump also reiterated his previous threats to tax the remittances sent by millions Mexicans living in the United States to their family members at home.

Mexico received $3.54 billion in remittances in June, the second-highest level since records began in 1995.