Mercedes-AMG GT Black Series has raced to become the fastest production car at Nordschleife of the Nurburgring after lapping the circuit in 6:43,616 minutes for the 20.6 kilometre-long track without straight line measurement for track section T13.

The sports car clocked 6:48,047 min for the 20.832 kilometre-long total track measured with the straight line measurement. With 730 hp of power at its disposal, the sports car was put on the track by GT3 driver Maro Engel. Mercedes-AMG GT Black Series broke the previous record of 6:44,97 min set by Lamborghini Aventador SVJ in July 2018.

During the record run, the sports car was in its completely standard form. Few adjustments were made to the car's aerodynamics and suspension systems such as extending the front splitter made of visible carbon fibre to the Race position and lowering the lower and upper wing blades of the rear spoiler. The adjustable AMG coilover suspension with adaptive adjustment damping was lowered by five millimetres at the front and three millimetres at the rear. 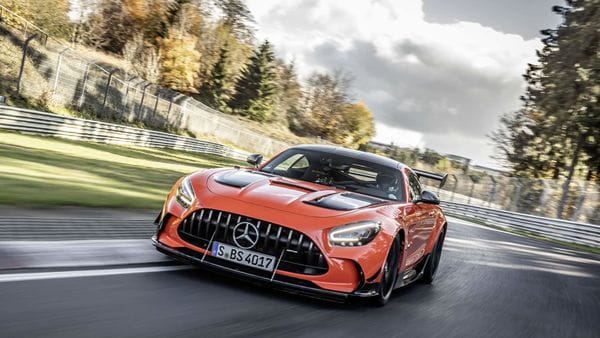 Engel adjusted the nine-stage AMG traction control between positions six and seven, depending on the section of the track. The camber was adjusted to the maximum possible values of negative 3.8 degrees at the front axle and negative 3.0 degrees at the rear.