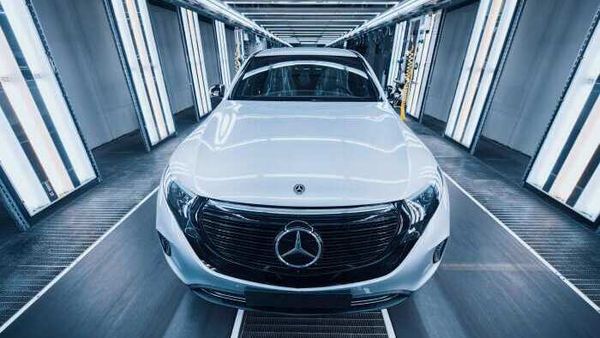 Mercedes-Benz EQC is the first electric vehicle of the car maker's EQ brand to hit the roads. With new technological upgradations, the all-electric luxury SUV will now come with an ex-factory water-cooled on-board charger with an output of 11 kW. This significantly shortens the time for alternating current charging.

The EQC can thus be charged at home much more quickly at the Wallbox and at public charging stations with alternating current. This car's 80 kWh battery can now be charged in 7 hours 30 minutes from 10 to 100 percent as compared to the previously taken 11 hours with a 7.4 kW charging capacity. The charging will be even faster at direct current charging stations.

The Mercedes EQC was the first all-electric vehicle to be integrated into ongoing production at the car maker's Bremen plant in Germany in May 2019 on the same line as the C-Class Saloon and Estate.

Mercedes says its electrically-operated vehicles are enjoying increasing popularity around the globe. The company has delivered a total of 45,000 electric vehicles and plug-in-hybrids worldwide in the third quarter of 2020, including around 2500 EQC in September. The global product portfolio of the company now encompasses five all-electric models and more than 20 model variants as plug-in hybrids.

The EQC was launched in India last month at ₹99.30 lakh (ex showroom, India, for first 50 units only), available in six cities in phase 1. The SUV became first EV in the country's luxury car landscape. The all-electric SUV was launched with a range of around 350 kilometres and a warranty of eight years on the battery pack.