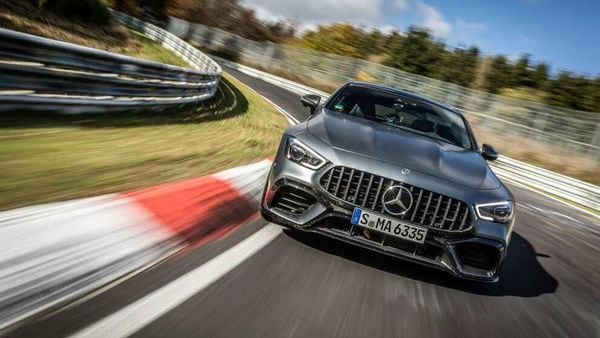 Mercedes AMG GT 63 S 4MATIC being pushed to its limits at Nurburgring.

Mercedes AMG GT 63 S 4MATIC+ has raced to become the fastest car in the 'luxury class' segment at Nordschleife of the Nurburgring after the four-door coupe was put to its absolute limits at the iconic venue. The car clocked 7:27,800 min for the 20.832-kilometre-long complete track with straight-line measurement for track T13 and 7:23,009 min for the 20.6-kilometre-long version without the same straight-line measurement.

With 639hp of power at its disposal, the Mercedes AMG GT 63 S 4MATIC+ was put on the course by AMG development engineer Demian Schaffert who is also a former racing driver. Schaffert managed to beat the previous record which he himself at set in the same variant earlier. The car in its latest challenge, was in its completely standard form and its equipment list included fully variable AMG Performance 4MATIC+ all-wheel drive, active rear-axle steering, an electronically controlled rear-axle limited-slip differential and the AMG DYNAMICS agility programme. Available as option to buyers, the Michelin Pilot Sport Cup2 tyres had a major role to play as well. Mercedes informs the track was even more challenging because certain sections had wet spots.

Additionally, an aero package which is also on offer as option to buyers, helped the car with enhanced stability at high speeds. This is especially significant because Mercedes states that some sections of the track had wet sports and that while the ambient temperature was at 7C, the asphalt temperature measures at 10C.

Quite obviously then, the record time was a moment of pride for Mercedes as a company and Schaffert in particular. "“Even though I’ve been accompanying our GT 63 through its development for several years now, it’s always impressive to see the wide spread we have been able to achieve with this exclusive vehicle," he said. "The four-door coupé is comfortable and equipped with many intelligent safety features for everyday driving, and on the other hand it offers this extremely high level of driving dynamics and precision, which we have now been able to demonstrate once again on the demanding Nordschleife,"