From Noida to Gurugram, most of the roads are chocked as commuters wade through waterlogged streets.
By : ANI
| Updated on: 19 Aug 2020, 11:14 AM 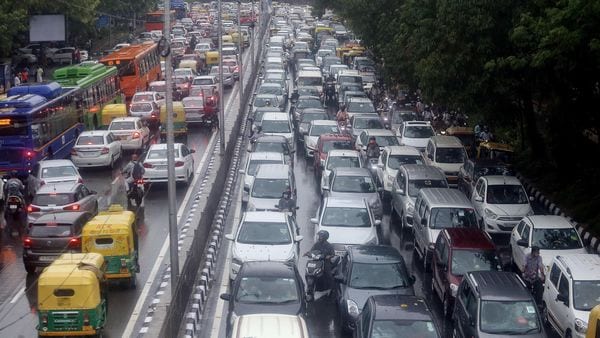 A view of a heavy traffic jam at Vikas Marg after rainfall in New Delhi. (ANI Photo)

Delhi and its adjoining areas such as Noida, Gurugram, Faridabad and Ghaziabad received rainfall in the morning, which led to waterlogging and traffic snarls at various major junctions.

For hassle-free commuting, the Delhi Traffic Police issued an advisory for the people informing them about the routes with heavy jams.

According to the MeT Department, the capital is going to get more rainfall till August 23 with generally cloudy sky. The temperature would range between 25 degrees Celsius and 35 degrees Celsius.