The move is aimed at maintaining strong pipeline of models developed at low costs with faster turnaround time.
By : mint_print
| Updated on: 26 Nov 2019, 12:21 PM 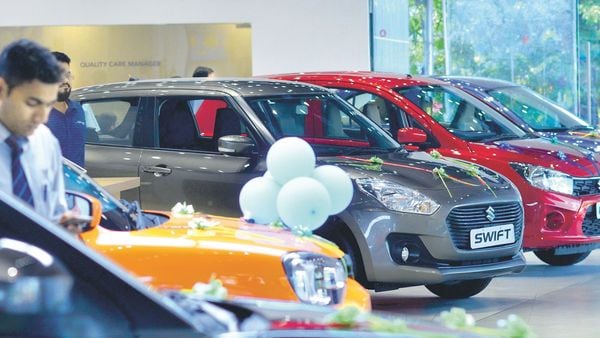 Maruti Suzuki India Ltd is set to rework its blueprint for introducing new products over the next decade as the country’s largest carmaker strives to maintain its dominant position in the market, said two people with direct knowledge of the development.

The revised strategy would see the Suzuki Motor Corp. unit introduce models that could be sold in both the premium Nexa dealerships as well as the mass market Arena showrooms, the people said, requesting anonymity.

The revamp is aimed at maintaining a strong pipeline of models developed at lower cost with a faster turnaround time, the two people said. The plan is expected to help the automaker as launching new products at regular intervals will allow it to effectively address demand and combat rivals.

“Maruti is expected to launch one such product with two versions every year. Most of the competition is also coming in those segments, which is addressed through Nexa," said the first person cited above. Cost savings will be a huge benefit under the new approach, the person said.

The automaker is likely to adopt the new strategy with the Vitara Brezza compact sport-utility vehicle when the product undergoes a full model change around 2021, the first person said, adding the new model will be sold through both Nexa and Arena showrooms.

The second person said it typically costs between ₹900 crore and ₹1,100 crore to develop a new car model in India, whereas a variant, even with drastic changes to the interior and exterior, requires an additional ₹200 to ₹250 crore.

Selling different versions of the same model would therefore require only an incremental cost of about 20%, which would be significantly lower than developing a new model for sale either through Nexa or Arena dealership, the person said. The costs on research and development would also halve if the models are built by re-engineering existing vehicle platforms, the person added.

Maruti would be following its rivals such as Renault SA, Nissan Motor Co. and Volkswagen Group which have taken similar approaches with their products previously. Automakers are increasingly feeling the need to develop new products faster as their life cycle shortens due to changes in customer needs. In the current slowdown, Maruti’s main rival, Hyundai Motor India Ltd, increased its market share to 18.19% in the April-October period from 16.96% thanks to new products like the Venue compact SUV. New entrants such as Kia Motors India Ltd and MG Motor India Pvt. Ltd generated strong customer interest for their debut products despite the slowdown.

Maruti has, meanwhile, witnessed a 23.2% fall in domestic passenger vehicle sales in the April-to-October period, leading its market share to dip to 49.59% in the period from 51.5% a year earlier.

“Cross badging of products between their distribution network Arena and Nexa looks to be an clever strategy. This way Maruti will be able to capitalize and build more volumes on the same platform and thus improvise on profitability," said Puneet Gupta, associate director, IHS Markit. “Consumers will get access to better value and multiple proposition. In a way, Nexa and Arena may also address different needs and consumer expectation with minimal investment. Ertiga and XL6 is an excellent example of the same."

Maruti in August launched the XL6 multi-purpose vehicle, a reworked version of its Ertiga. While the XL6 is sold through Nexa showrooms, the Ertiga is retailed through Arena showrooms. These helped Maruti occupy the top slot in the segment, overtaking Toyota Kirloskar Motors Pvt. Ltd.

The second person cited above said that vehicles smaller than the Ignis hatchback may not be covered under the new approach. This strategy will help protect Maruti’s “50% market share till 2030 and beyond. The firm will need more products and this is an easy way out", said the second person.