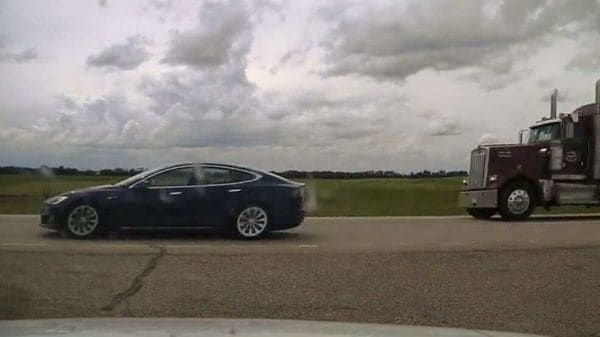 This photo was tweeted by @RCMPAlberta

In another blow for those advocating the many advantages of a self-driving vehicle, a man in Canada has been charged for dangerous driving and faces legal action after he allegedly fell asleep behind the wheels of a Tesla car on Autopilot. That the vehicle was at 140 kmph with the sleeping driver inside perhaps made the charges against the accused even more serious.

The incident took place near the town of Ponoka in Canada's Alberta province. In a tweet put out by local police department, it was informed that law enforcement were called in for action when the car was spotted. "Alberta RCMP received a complaint of a car speeding on Hwy 2 near #Ponoka. The car appeared to be self-driving, travelling over 140 km/h with both front seats completely reclined & occupants appeared to be asleep," the tweet informed. "The driver received a Dangerous Driving charge & summons for court."

According to local news reports, the accused is a 20-year-old an that the speed limit on the stretch the car was on is 110 kmph. "Nobody was looking out the windshield to see where the car was going," Police Sergeant Darrin Turnbull told Canadian public broadcaster CBC.

Tesla cars on Autopilot mode claim to be a safe driving option with CEO Elon Musk repeatedly claiming that the technology allows for eradicating incidents which can be caused by human errors. Even then, it is recommended - and mandated by law in many places, that a a driver is attentive and has hands on the steering even if the car is in self-driving mode.

For now, Tesla's Autopilot mode does not let complete autonomous driving kick in but offers several driving assist features like auto acceleration, auto braking etc which allows for less human intervention. Sleeping inside such a vehicle, therefore, is not just absolutely reckless but illegal as well.