The Maharashtra government on Tuesday announced severe, curfew-like restrictions on public movement over the next 15 days across the state to curb the Covid-19 surge.
By : PTI
| Updated on: 15 Apr 2021, 09:33 AM 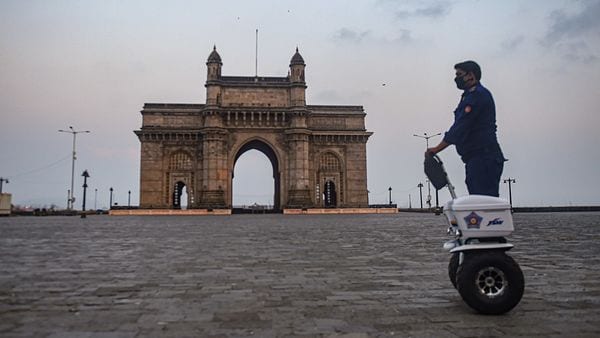 A view of the deserted Gateway of India before the start of 15 days curfew amid surge in Covid-19 cases in Mumbai.

Maharashtra's in-charge DGP Sanjay Pandey on Wednesday said that no e-pass is required to be obtained for the movement of vehicles during the coronavirus-induced restrictions imposed in the state.

He said that only those vehicles that are involved in emergency services and those private vehicles that come out with a valid reason are allowed to operate during the restrictions.

Asking the people to cooperate with the government machinery in the fight against Covid-19 by not stepping out of their houses during the curbs, he said the police personnel should not penalise or lathi charge if any person comes out on the street with a valid reason of essential or emergency work.

The Maharashtra government on Tuesday announced severe, curfew-like restrictions on public movement over the next 15 days across the state to curb the Covid-19 surge.

"This is a war against the virus and we have to win it by following the guidelines issued by the government to prevent its spread and by helping the authorities, who are on the streets for common citizens," Pandey said.

If someone comes out on the street despite being aware of the strict implementation of the prohibitory orders, then there must be some urgency for him. In that case, the police should help such a person, he said.

"There are clear instructions that there should not be any hurdles created for those persons, who are out for essential and emergency work. They should not be penalised," Pandey said.

The police personnel should not lathi charge such persons and they should get proper assistance, he said.

"But if anyone is found coming out without any valid or proper reason despite the instructions, then stern action will be taken against the violator," he said.

There is no requirement for e-pass for essential and emergency services and for the private vehicles that come out on the streets during the restrictions with a valid reason, he said.

"We had requested the government not to implement e- pass system. Accordingly, there is no requirement of e-pass for travel," he said.

During the coronavirus-induced lockdown last year, people were required to carry e-pass for travel in vehicles.

Pandey said that all the grocery shops will be open during the period of restrictions and all kind of public transport is also operational, he said.

Police and all the frontline workers are fighting this war for the safety of citizens, he said, adding, "We need their cooperation and they only have only to stay at home."

The people, who work in the exempted category, should carry ID cards, valid letters for verification by government authorities, while checking for violation of government guidelines, he said.

Implementation of the government orders will strictly be done during the night also, he said, adding that for any confusion and queries people can contact the local police stations and police control rooms.

"All police officers and other personnel will be on the roads in two shifts," he said, adding that around 13,280 home guards have been deployed in all the police commissionerates and districts," he said.

At least 22 companies of the State Reserve Police Force (SRPF) will be deployed if required, the official said.

At least 81 per cent police personnel have been vaccinated against coronavirus, and this figure excludes the staff in Mumbai city, he said.