On day one of lockdown 4.0 heavy traffic was witnessed on Delhi-Noida Direct (DND) way, that connects south Delhi with Noida. Similar scenes were witnessed at the Delhi-Gurugram borders.
By : PTI
| Updated on: 19 May 2020, 03:15 PM 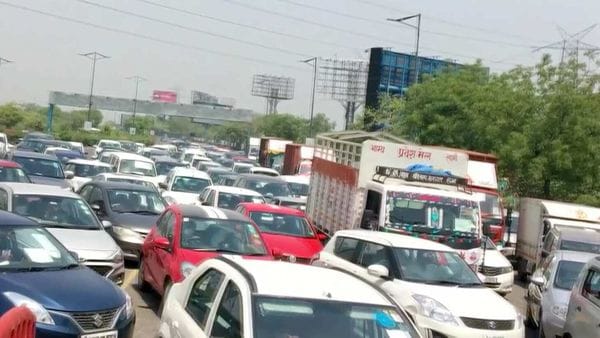 Traffic congestion is seen at a toll booth on Delhi-Noida Direct (DND) Flyway during the fourth phase of nationwide lockdown to curb the spread of coronavirus, in Noida.

With relaxations being granted for public movement during the fourth phase of the lockdown, there was a significant increase in the number of vehicles on roads and traffic remained heavy at some places, especially the city borders.

In the morning hours, there were some traffic snarls at the Noida border as police asked for passes from motorists.

Taking to Twitter, the Delhi Traffic Police alerted commuters travelling to Noida to plan their trip only if their vehicles have movement passes issued by the authorities concerned.

"As UP police is allowing entry to Noida only for vehicle heaving movement pass issued by DM Noida. People travelling from Delhi to Noida using Kalindi Kunj barrage flyover and DND flyover may plan their trip accordingly," it tweeted.

"We are checking every vehicle but sometimes it becomes very difficult due to the numbers of vehicles. People with valid passes are being allowed.

"However, if someone does not have a pass and is carrying some important items like medicine, they are also being allowed," he said.

The official said there were some who had come out only to roam in the area and they were sent back with a warning.

According to a Delhi Traffic Police officer deployed at the Noida border, most of the vehicles were going from Delhi to Noida in the morning.

The scenario will change in the evening when people will return to their homes, he added.

Public transport resumed in Delhi on Tuesday with buses, auto-rickshaws and taxis plying on the road, albeit with a limited number of passengers.

The Delhi Transport Corporation and Cluster buses resumed services with social-distancing norms and safety measures in place like use of sanitisers and masks to check the spread of the deadly coronavirus.

Chief Minister Arvind Kejriwal on Monday had announced relaxations in curbs, including reopening of public transport with social-distancing norms, during the extended lockdown that is slated to end on May 31.

Senior police officers said over 2,000 traffic police personnel have been deployed on the ground to ensure the smooth flow of vehicular movement across the city and at the adjoining bordering areas.

In the wake of relaxations during the phase four of the lockdown, the volume of vehicles on the roads increased significantly and to manage the movement of traffic, the focus is being laid on regulation in junction management, said Special Commissioner of Police (Traffic) Taj Hasan.

"We have had our presence on pickets earlier but now with the increase in vehicles on the roads, we have also deployed our staff on traffic junctions for regulations to ensure smooth movement of traffic and no jams," he said.

Several pickets of traffic police personnel, Hasan said, have been deployed across the city and at the bordering areas.

On the eastern border alone, at least 16 pickets from the department have been deployed to control traffic, he added.

Since rules were being strictly followed at the UP border and many commuters were not allowed entry, those who were on the stretch of Kalindi Kunj were asked to take a U-turn, due to which there was a heavy traffic movement, Hasan said.

Traffic officials said even though the volume of vehicles has increased across the city but no reports no major jams have been reported so far.

Pranav Mishra, a media professional who has been commuting to Delhi from Noida on a daily basis since the lockdown began on March 25, said heavy traffic jams are being witnessed near the Ghazipur landfill site as the flyovers have been closed and there is heavy barricading of roads as well.

There are heavy jams at toll plazas due to which commuters end up waiting in snarls for about 30-40 minutes at the border while returning from Delhi in the evening hours, he said.

"In the morning hours too, there is a long wait due to the barricading and toll plazas at the check points, and in the evening, between 6-8:30 pm, since the flyovers are closed, the only entry point which is available is from near the Ghazipur landfill site.

"With the number of vehicles increasing on the road and intensified checking for movement passes by the concerned officials on, there was further delay in the movement of vehicles across the border this morning," he added.

Another commuter, Gaurav Singh, who works in Noida, said, "I was going to my office from Delhi after almost two months. There was a huge traffic during the peak hours in the morning. I somehow managed to reach office and I am sure that the traffic will create issue in the evening also."

"I didn't get any conveyance from Sector 49 in Noida. I somehow managed to reach the border and I have to go to New Delhi railway station. I have to board a train for Jhansi at 4 pm," a man said, who did not wish to be named, said.